Over 300 Jonesporters turned out for a special town meeting July 20 at which a proposed moratorium on commercial aquaculture aimed at a proposed land-based fish farm was defeated 201 to 91. Photo by Nancy Beal

By a vote of 201 to 91, voters in Jonesport on July 20 rejected a six-month moratorium on commercial aquaculture facilities that would have stalled, if not killed, a plan by Kingfish Maine to build and operate a $100 million land-based fish-growing facility on the town’s eastern shore. The moratorium was backed by a small but vocal group of fishermen, environmentalists, and lobbyists backed by the family corporation that owns the Roque Island group in Chandler Bay east of the proposed fish plant.

The measure was originally the fifth of seven articles on the special town meeting warrant, but was moved to the end following a motion by John Church that was approved in a hand vote. When all the other matters were disposed of, the moratorium was put on the floor for discussion by another motion from Church, followed by a motion from Selectman Harry Fish to hold a written ballot. (Moderator Billy Milliken explained at the outset that a show-of-hands vote could be challenged by anyone deeming it inconclusive.)

As soon as Milliken declared that a show of hands vote supported the written ballot motion, Church immediately stood and moved to “call the question,” a parliamentary move that, if approved by a two-thirds majority, stops discussion and triggers an immediate vote. In another unchallenged show of hands vote, Church’s motion to cease discussion prevailed, and a vote on the moratorium question went to the voters.

Prior to the meeting—and delaying its start for nearly an hour—folks had stood in line while officials checked their voting status. Those duly registered were given red strips of art paper to lift when participating in a hand count. Of the 293 voters who received the strips, 292 participated in the written vote on the moratorium and, by a margin of 201-91, rejected it, clearing the way for Kingfish to continue with its plans to raise yellowtail within its borders.

“We want to be in a town that will welcome us as a collaborating business partner, one that will provide jobs and economic benefits to the community,” said Kingfish Operations Manager Megan Sorby in a prepared statement following the vote. A frequent visitor to Jonesport from her workplace in Franklin and had made many friends in Jonesport, Following the meeting, she received hugs from several members of the group that had backed Kingfish’s plan and planted lawn signs around town prior to last week’s meeting, calling for a “No!” vote on the moratorium.

“The defeat of the moratorium demonstrates that town residents have confidence in Jonesport’s Planning Board and the existing town ordinances,” Sorby said, now turning her company’s efforts to gaining approval of the vast project from the planning board.

Kingfish’s quest for the only local permit needed—the company now has all those required by the state and federal governments in hand—began last fall with a preliminary appearance before the town’s planning board. With some other permits then still pending and a mammoth amount of information to digest, the board opted to table any action on the application until the company had all the permits required.

With those recently in hand, the company got on the agenda for the July meeting which, coincidentally, was regularly scheduled for the night before the town meeting on the moratorium. Kingfish’s team included Sorby and her husband Tom, Darrell Richards of Roque Bluffs who will become the facility manager when the plant is up and running, William Lane, the engineer who designed the facility, and the company’s lawyer, Adrian Kendall of Norman, Hanson, and Detroy of Portland.

The only decision that the board made on July 19 was to deem the Kingfish application “complete.” Kendall raised the issue of whether some emails among the Roque Islanders, urging recruitment of local folks for their cause constituted “ex parte” communication, but there was no resolution of the issue. Also unresolved was whether a prevailing “yes” vote on the moratorium the following night would apply to Kingfish, since it had already initiated proceedings with the town. With the negative vote on the moratorium, this issue became mute.

The next meeting with the planning board is scheduled as a special session, in the high school gym instead of the town office, at 7 p.m., Tuesday, August 2. It will be open to the public. 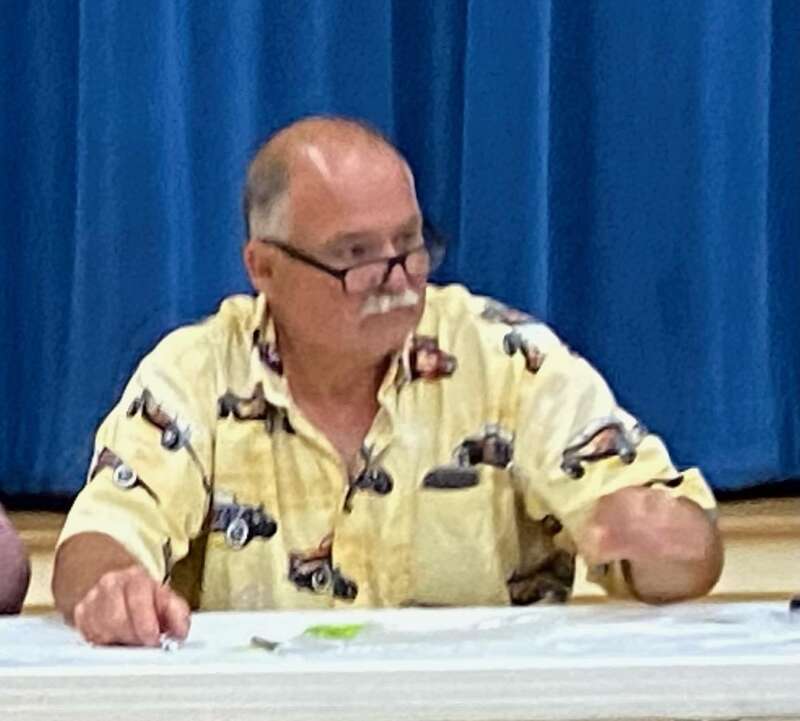