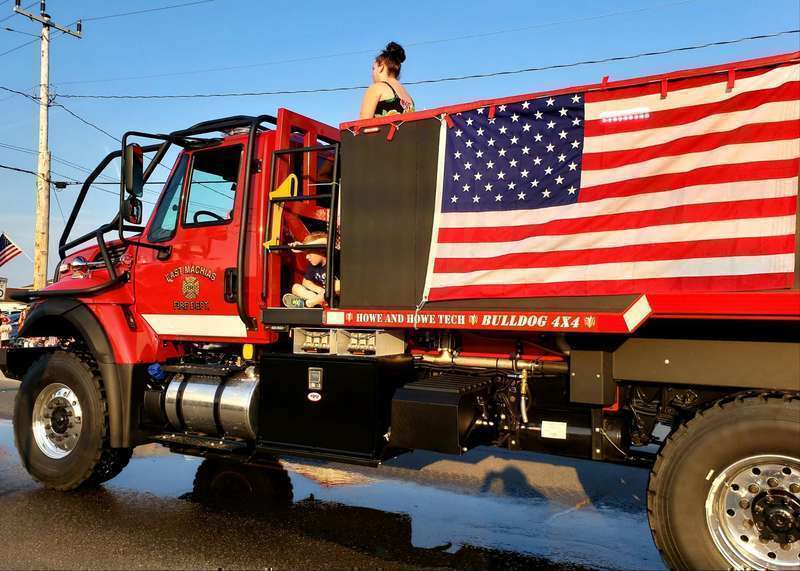 A never-before-seen countywide first responders parade will take place on the Fourth of July, beginning in Steuben at 11 a.m. and ending in Indian Township. Photo by Sarah Craighead Dedmon

A series of Independence Day cancellations led Rep. Will Tuell to wonder if, despite coronavirus restrictions, there might a creative way for Washington County to celebrate the Fourth of July together. The result will be an unprecedented parade that will begin in Steuben and follow Route 1 all the way to Indian Township.

“The goal behind the parade is to celebrate the Fourth of July and also to honor our first responders from Washington County,” said Tuell. “The thinking is since a lot of these towns aren’t having parades and festivities of their own, let’s just go all the way from Steuben to Indian Township.”

Tuell reached out to Baileyville Fire Chief John McPhee, also president of the county firefighter’s association, and McPhee offered to pitch in, in a big way.
“He offered to basically do all the legwork with the different departments, which is a big help,” said Tuell.

“I thought it was a good idea because there’s not much going on on the Fourth this year,” said McPhee. “It will bring everybody together, but still lean on the cautious side with coronavirus.”

McPhee said the response from fire departments has been positive, with only one department along the route unable to make it. All of the other departments along Route 1 and many in nearby towns plan to make their way to the parade next week.

First responders will join in with the parade when it passes their towns, but few vehicles will participate for the full length of the route. That is in part because the parade will likely take four hours, and in part because of elevated fire danger.

“If it stays dry like it has been, nobody dares go too far,” said McPhee.

In addition to fire trucks, parade watchers can expect to see ambulances police cars, and trucks from Wreaths Across America.

“I think we’re fortunate that the route goes for probably 60-80 miles, and there’s enough room for people to spread out,” said Tuell. “Feel free to bring an American flag and wave it. This is honoring the first responders and thanking them and I think it would be great to see a lot of American flags along the way.”