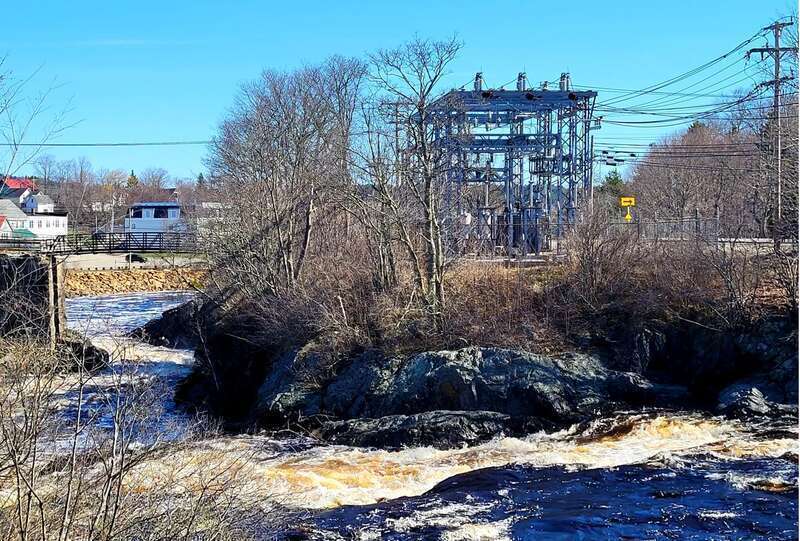 Versant Power will next week begin transitioning some Machias electricity customers off of this aging and unsightly substation hanging over the town's iconic namesake, Bad Little Falls. One day, this station will be decommissioned and removed. Photo by Sarah Craighead Dedmon

Plans to decommission and remove an aging electrical substation will move one step closer to reality on Wednesday, May 18, when Versant Power begins transitioning some Machias electricity customers onto new power circuits.

Ultimately, says Versant Communications Specialist Marissa Minor, the project will move customers on the southern side of the Machias River onto an entirely new substation.

“Crews will begin preliminary work that will allow a substation reaching the end of life in Machias to be removed,” said Minor. “Versant crews will work near Route 1 and Elm Street to move customers served by the existing substation to other circuits that will prepare infrastructure for the transition to a new substation this fall.”

At a selectboard meeting last month, Machias Town Manager Bill Kitchen said the town is holding aside a tax-acquired property, 174 Dublin Street, which might serve as a future location for the new substation.

According to Minor, this project will also one day allow Versant Power to re-route power to some customers from alternate electrical circuits once the new substation is complete. This technique, called looping, will benefit those customers should their normal power feed be lost.

Planned Machias service interruptions on May 18 will be split into two-hour intervals throughout the day, running from 5 a.m. until 6 p.m. For a complete list of times and roads affected, please visit https://www.versantpower.com/outages-and-restoration/planned-outages

A timeline to physically remove the Elm Street substation has not yet been determined but could take place in 2023.

Fourth of July in Machias