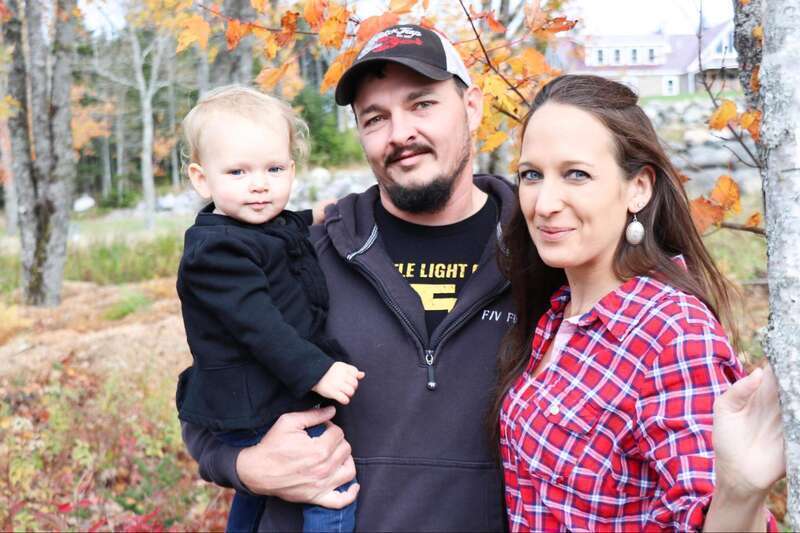 Tristen and Sara Nelson of Roque Bluffs began dating during their time in Washington County Treatment and Recovery Court. Today, they’re married, living in their own home, and raising their daughter, Ava Grace. “Doing the hard work will pay off,” says Sara. “You do the hard work in treatment court, and you continue to do the hard work in life.” Photo courtesy Nelson family

Treatment and Recovery court offers ‘helping hand instead of handcuffs’

Sara and Tristen Nelson of Roque Bluffs have enjoyed a string of happy life events. Married in 2018, they welcomed their daughter Ava Grace later that year, and then in 2021, they bought their first home. Sara and Tristen are thriving today, and their present happiness has its roots in a time when each faced a life-altering decision — go to jail, or go to Treatment and Recovery Court.

“We had already tried the easy way out, and it didn’t get us anywhere,” recalls Sara, who, together with Tristen, has been in recovery for six years now. “I knew Treatment and Recovery Court would be a lot harder, and I chose the hard work because I knew what the end result would be if I did not.”

We’re all familiar with the criminal court system, but few of us know about Maine’s Treatment and Recovery courts, which since 2001 have been helping people who find themselves at the intersection of the law and addiction. Formerly called Drug Court, Maine changed its name last year.

“Treatment and Recovery is a strength-based name, and that name shift goes along with a larger movement toward reducing stigma,” says Abby Frutchey, the Community Caring Collaborative Substance Use Response Coordinator. Frutchey is an early graduate of the court and today serves as a consultant to the Washington County Treatment and Recovery Court.

The United States has both the highest number of incarcerated adults in the world and the highest per-capita incarceration rate in the world, two statistics inextricably connected to America’s “War on Drugs,” a concept first rolled out in 1971 under President Nixon.

Today, the Federal Bureau of Prisons reports that out of 13 offense categories, 45 percent of its inmates are serving time for just one — drug charges. In Maine, as of 2020, drug offenses accounted for a smaller percentage of inmates, 17 percent, but still form the largest single category of inmates.

Treatment and Recovery Court (TRC) takes an entirely different approach, using evidence-based treatment methodologies to support healing for people with substance use disorder instead of just jailing them.

“The people that we send to jail, they get out,” says district court judge David Mitchell, who has overseen Washington County’s Treatment & Recovery Court since 2013. “So, what’s going to happen when they get out if you haven’t taught them how to behave when they’re in there?”

The numbers tell the story. Without Maine’s Treatment and Recovery Court, re-arrest recidivism rates six months after time served are 258 percent higher than those for Maine TRC participants, with 31 percent of a Maine comparison group arrested again, compared to 12 percent for TRC participants, [See chart below.]

Looking at convictions, the numbers paint an even stronger story. According to a 2020 Adult TRC review by Public Consulting Group, the difference between TRC participants and a comparison group grows as time goes on, reaching 683 percent at 24 months, “....greatly magnifying the positive effect of treatment court,” reads the report.

“I always say that instead of offering handcuffs, in treatment courts, we offer a helping hand,” says Mitchell. “We have learned more than ever that substance use disorder is a treatable condition, and that… incarcerating them and limiting their access to treatment and rehabilitation increases the risk factors that they will re-offend.”

Entry into the TRC program happens after someone has been arrested but before they’ve been tried.

A key component of the program is helping TRC participants build connections to treatment and recovery resources, including in their local community, and connections to help with their basic needs, like employment, education, peer support, and medical services, all of which, if not managed, could act as barriers to recovery.

Once accepted into the program, TRC participants are surrounded by a multidisciplinary team that in Washington County includes case management by Maine Pretrial Services, recovery services and therapy through Aroostook Mental Health, a probation representative, the district attorney, a defense attorney, and judge Mitchell.

The team meets every single week, but for TRC participants, the time commitments are even more extensive.

“They have check-ins every day, they get randomly tested at least two times a week, but they might get tested five days a week. In the beginning, they’re in counseling three days a week, then they have to go to two to three self-help meetings every week,” says Mitchell. “We hold them accountable. It’s a lot more difficult than going to jail.”

“With jail, you go in, you do your time, you’re done. But while you’re in jail, you don’t learn how to deal with your addiction, you don’t focus on the core points of your addiction issue,” says Tristen. “A lot of times when you come out of jail, you’re worse off than when you went in.”

“For me, the programs worked together,” says Tristen. “I would never have gotten through recovery court if it wasn’t for Arise.”

Throughout a participant’s time in TRC, which lasts a minimum of 12 months, every Friday, the team meets to discuss their progress.

“We go over every single participant — what they did, what difficulties they had, how they handled it, did they have a positive test, did they admit it,” says Mitchell, “Then I meet with these individuals in court. I have face-to-face interaction with them in the open courtroom, which is unheard of in the regular criminal justice system. I enjoy it.”

“It is not an overstatement to say that these courts have saved lives, restored families, and provided meaningful opportunities for individuals struggling with substance use disorders to start down a path toward long-term recovery,” says Smith, who also has high praise for Mitchell.

“In my opinion, the Washington County Recovery and Treatment Court is particularly effective because of the strong interest that Judge David Mitchell has in the court and the hands-on approach he takes with the participants,” says Smith.

Mitchell says the personal aspect of TRC is part of its appeal for him and part of its strength for participants.

“I meet with these individuals on Fridays in court, the door is open, and I have interaction face to face with them in the open courtroom. That’s unheard of in the regular criminal justice system,” says Mitchell.

Sara completed TRC after one year in August 2017. It was hard work, she says, but today she’s happy to share her story. Sometimes, people ask her why she’s so open about it.

“My response every single time is this — you can walk down the street and see the face of addiction no matter where you go, but you don’t recognize the face of recovery and see that it’s possible,” says Sara. “I do it to tell people who I’ve been and where I am now. It is possible to heal.”

“I can now look at my mom and my seven siblings, and they know that I’m okay, that they have their daughter back and their sister back, and that’s huge,” says Sara.

Maine’s Treatment and Recovery Court is an evidence-based treatment program, and the data shows it’s working. This chart, part of a 2020 Maine Adult TRC review by Public Consulting Group, shows that at 24 months, treatment court participants have a 19 percent chance of being arrested again, compared to a 45 percent arrest recidivism rate for a comparison group. Chart by PCG

Waters of Island Institute to resume work in Eastport

Life on the run