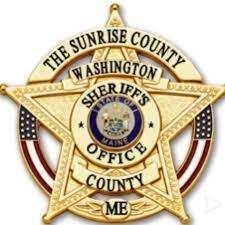 The Washington County Sheriff’s Office today reported that an eight-hour standoff in Lubec on Tuesday, Sept. 13, was resolved without injury.

According to the SO’s release, a Lubec woman called 911 at 7:41 p.m. reporting that she had been threatened by a neighbor. When Washington County SO Deputies arrived, it was reported that Jacob Elliott, 37, of Lubec had approached the neighbor’s property and threatened to assault and kill members of the household.

Elliot then ran toward a deputy, threatening to ill him as well, before retreating back to his residence, where he was known to have firearms, though no weapons were seen at the time.

Deputies approached Elliot’s residence when he emerged and they advised him he was under arrest, Elliot ran back into the residence and continued to threaten to kill law enforcement.

Later that evening the Maine State Police Tactical Team was notified of the devolving situation. They arrived at the scene and were able to speak to Elliot by phone.

At approximately 4:08 a.m. Elliot surrendered without incident and was taken into custody.  Elliott was arrested for Criminal Threatening, Terrorizing, and failure to submit to arrest or detention and transported to the Washington County Jail.  Elliot’s bail was set at $5,000 cash, he posted the bail and was released later that day.  Elliott is due to appear in Machias District Court on Nov. 7.

Assessing the domino effect of closing the prison