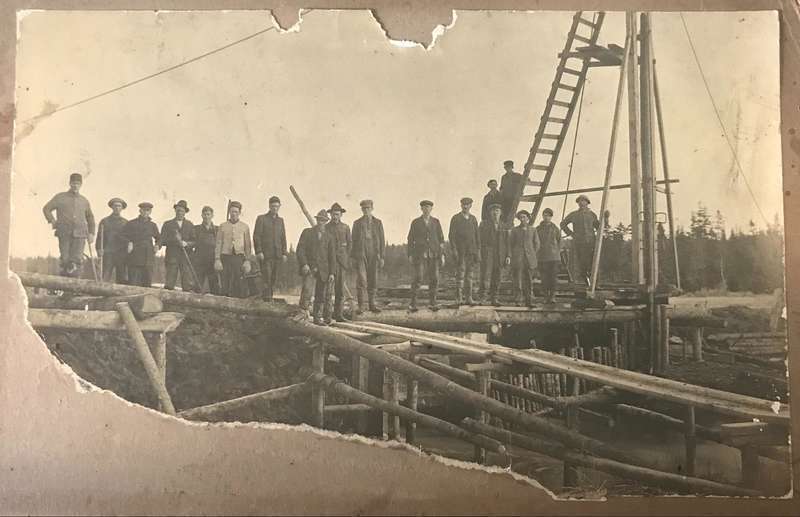 This vintage photograph captures construction on the original dike and causeway at the confluence of the Machias and Middle Rivers. Some of these timbers still support the bridge, but are in decay. Maine Department of Transportation last week said the dike reconstruction project timeline has slipped from 2020 to 2023, at the earliest. Photo courtesy Linda Lund

Work on the area’s most dreaded stretch of frost heaves should begin next spring, according to Maine Department of Transportation (DOT) Senior Project Manager Randall Barrows.

A call for bids to widen and rebuild an East Machias length of Route 1 running from Pope Memorial Bridge and north 1.8 miles will be advertised on Dec. 23. Barrows says DOT anticipates clearing and utility work could begin in Feb. 2021, and road construction could begin in April, weather permitting.

The timeline to rebuild the Machias dike, however, has slipped by more than two years. Though DOT projects statewide have been delayed owing to decreased fuel tax revenue and increased material costs, DOT Project Manager Nathan Howard says those factors are not impacting the dike project.

“The current schedule reflects the complexities of permitting and designing a project that involves multiple large culverts with tidal gates,” said Howard. “We also are trying to coordinate the construction of the dike project with other projects in the area.”

DOT initially estimated construction could begin on the project this December, but Howard now estimates it will not begin before 2023, at the earliest.

“The dike” is the name locally given to the causeway that spans the confluence of the Machias and Middle Rivers, but the dike apparatus itself is actually only a small part of that bridge, contained on the side nearest to the Machias boat launch.

Though many alternative options were considered, including an elevated bridge instead of a causeway, the chosen DOT solution will leave the bridge as it is and rebuild the existing dike, which allows the upstream Middle River pond to vary up and down by roughly one foot. There will be four or five box culverts in the new structure, one of which will have an adjustable gate that could be opened or closed to varying degrees. The others will have tide gates that only open to allow water to flow from the Middle River into the Machias River.

At its base, the dike stands on logs laid in the 1930s. The bridge was reinforced with concrete in 2008, but photographs taken by divers in 2016 show erosion and decay in the wooden supports. In 2018, DOT Engineer Michael Wight said he believed any failures resulting from the decay would not be catastrophic, but isolated and incremental, such as potholes or areas of sinking pavement.

Currently, the state ranks the dike bridge four on a scale of zero to nine, which indicates “poor” condition.

A 2016 Federal Highway Bridge Inventory shows 26 percent of Washington County bridges are ranked “structurally deficient”, or 27 of the county’s 103 spans, the largest percentage of any county in Maine.