Rotten to the core

Last week’s column riffed off the continuing Twitter files revelations and the Hamlet quote, “Something is rotten in the state of Denmark.” The rot and the stink run deep. More evidence came to light on the US House floor and in revelations about Diversity, Equity, and Inclusion efforts mandated by the Biden administration that are guaranteed and designed to destroy freedom and prosperity.

House Republicans demonstrated they are not ready to or perhaps even capable of governing and coherently responding to the damage progressives and the left have done. To govern is to choose, and the House GOP chose to let the perfect be the enemy of good and show the nation that they are not capable of doing either. The failure to elect a Speaker and commence governing virtually guaranteed that the GOP majority will be short-lived, ineffectual, and irrelevant. About the only positive is the likely realization that with a Democratic Senate and White House and the $1.7 omnibus spending bill setting policy through September, the House is largely irrelevant. They might just as well recess as bloviate for the next nine months.

Just as the House Republicans were demonstrating how to fritter away their narrow majority and their lack of fitness for office, Florida Governor Ron DeSantis gave a stirring inaugural address touting freedom, federalism, and fealty to his voters and vision. The key takeaway- “Florida is where woke goes to die.”

Just prior to the New Year, we got a viral glimpse of the woke poison Biden, and the left are spreading. The pricey returns on “unity” efforts to promote woke diversity, equity, and inclusion throughout the federal government were on display.

This graphic on equity comes to us from the DEI training at the National Endowment for the Arts:

At least the NEA diversicrats attempted definitions of equity and (social) justice, which is more than the University of Maine System’s top administrators have been willing or able to do.

The Department of Veterans Affairs used this wonderful training graphic, which is likely available for grooming efforts in public schools across the country: 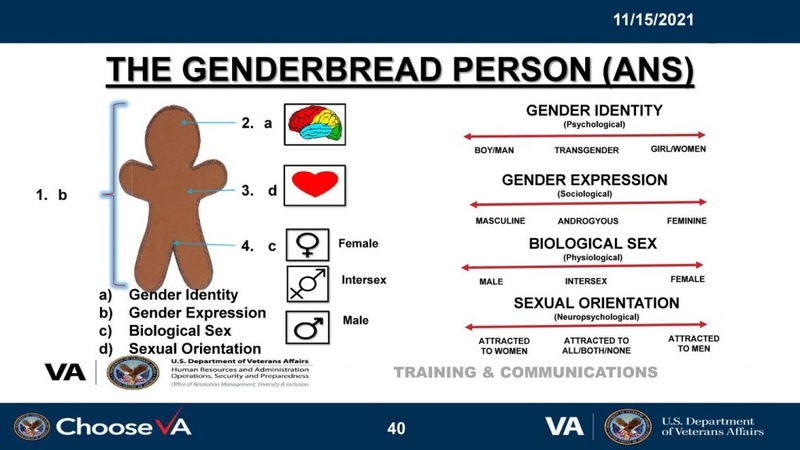 The Department of Veterans Affairs has a gender gingerbread person. Picture: WSJ/Supplied The US government’s woke training, The Australian, January 3, 2023. WSJ/Supllied

America is increasingly a depraved and declining dystopian cesspool. Groomer drag queen shows are promoted in “family-friendly” Fenway Park, libraries, middle schools, and the Oval Office when public health “Admiral” “Rachel” Levine shows up to salute “her” boss, groper, and sniffer in chief  Biden. Parents trying to protect their children from groomers and woke educators are labeled domestic terrorists by the U.S. Attorney General and censored by the legacy media.  Our top military leaders are focused on promoting diversity, equity, and inclusion and driving thought crime out of the ranks, which emboldens our enemies. Our friendly and polite Canadian neighbors have a left-wing social credit surveillance state promoting euthanasia and gun confiscation, and this is held up by the progressive woke American left as where we should be headed. Unfortunately, the folks who claimed they would do something about it have clearly demonstrated they will not. The rot runs too deep.