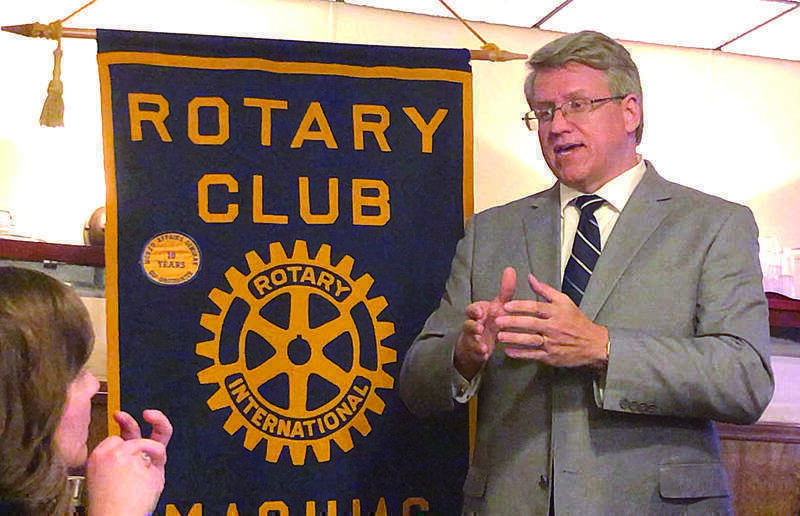 MVNO Publisher Pierre Little addressed the Machias Rotary Club last week and spoke on the problem of fake news and the value of community newspapers. Photo by Wendy Little

Pierre Little, MVNO publisher, was welcomed as a Machias Rotary speaker last week. His brief talk focused on weeklies as the backbone of communities and fake news as the dangerous scourge of truth in print.

Little, born in Moncton, New Brunswick, and educated in New Hampshire, has deep ties to New England. He has owned the MVNO for five years and the Calais Advertiser for seven. Under his leadership, editorial content and advertising revenue have steadily expanded.

“I’m going to speak to you about the onset of social media, fake news and the growth of Twitter,” he said. Then referring to the advent of the term ‘fake news’, he added, “President Obama had a couple of press conferences about fake news.”

An admirer of Sharyl Attkisson, a former CBS investigative reporter for its Washington bureau, Little says, “I have great respect for Sharyl Attkisson and what she calls astroturf in journalism. Everybody’s using Facebook today, but in 2012 Mark Zuckerberg said he’d allow more advertising. After that, fake news permeated through social media.”

Attkisson’s newest book, The Smear, encapsulates fake news and shows how the news is manipulated by hidden agendas.

Little explained how readers can learn if the news they’re reading is legitimate. “To find out if an article is true or not, make sure it links back to the newspaper. If it does, it’s legitimate.”

He is confident that newspapers, particularly weeklies, will remain on the front lines. “TV remains 75 percent of news consumption,” he said. “Sixty-five percent of readers still trust weeklies. A publisher tries to steer the team to the stories that are happening that week.”

Little has a favorite analogy of comparing a well-run newspaper to a well-run watch. “The best watches in the world are produced in Switzerland,” he explains, “because they’ve concentrated their energies on how to tell time really well.

“You’re going to have biases in any two newspapers, but the diversity of publications is important to readers today. Fake news is incentivized by money.”

Little illustrated this point by describing the man who made national news some time ago by giving up his job and staying home. Hundreds of clicks on grossly untrue news made the man $15,000 in one month.

Community journalism is far removed from such fraudulent excesses. “When you advertise in a newspaper, you’re helping to support the newsroom with editors and reporters for the community,” said Little. “When you  invest in your paper you care, and that reader who picks up that paper cares.”

From local sports to births and deaths, from special occasions to holiday events, the average weekly provides permanent documentation as well as a vibrant history of its physical readership area.

The Machias Rotary meets every Tuesday at 5:30 at the Bluebird Restaurant. On Tuesday, April 26, Red Gendron, head coach for the University of Maine men’s ice hockey team, will be the featured speaker.