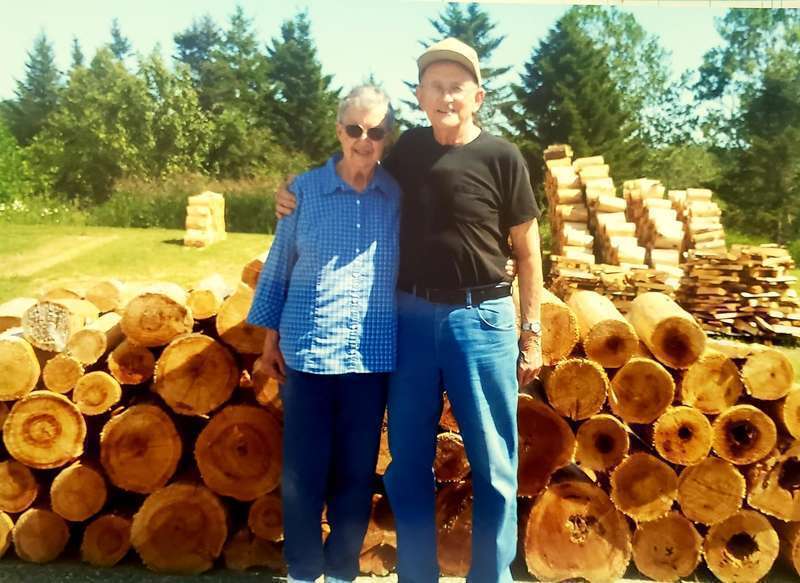 The Munsons reflect on 41 years delivering the MVNO

After 25 years in the car sales business, Dalton Munson decided to retire. He ran an advertisement in this newspaper thanking his customers, closed the doors on Munson’s Auto Sales and sat back to relax. That lasted about 15 minutes.

“A little while went by, and I got a little bored, not too much to do,” said Munson. “My wife picked up the newspaper one day and read in there where they were looking for someone to deliver the paper.”

Munson drove down to the newspaper’s office on Broadway and filled out an application with Nancy Hayward, who had just taken over as managing editor. “She didn’t know me and I didn’t know her,” said Munson, who was therefore surprised to receive a call from Hayward not long after arriving home in East Machias.

He asked her why she was calling so quickly. “You didn’t tell me you know the bosses!” she said, referring to Jay Hinson and Gene Townsend.

He was hired right away, and almost 42 years later, it seems safe to say it was a good decision.

Dalton Munson hails from East Machias, Edith Munson hails from Kennebec, and they married in 1956 right after Edith finished attending college at that Bangor Conservatory of Music. “The weekend I graduated we got married,” said Edith, who went on to become a professional organist and pianist, teaching at Machias Memorial High School for some time and playing the organ at area churches such as the Jacksonville Baptist Church, where she has played for 32 years. Edith has always been a part of delivering the papers, too.

“She does the paperwork as we go along in the car,” said Dalton. “I’m the only one hired for the job, but she’s there with me all the time.”

The routes have changed a few times in the last four decades, but the Munsons’ basic Tuesday routine is the same — pick up the papers on one side of the county in the morning, deliver them to stores from Calais to Milbridge, pick up the returns, and take them to the office on Broadway in the afternoon. Usually they’re home by 2 p.m.
MVNO Publisher Pierre Little said the significance of the Munsons' decades of service is not lost on him.

“We are so grateful and appreciative of Dalton and Edith, who have been part of the MVNO team for over 41 years!” said Little. “They have been full of smiles and always upbeat.”

“Dalton, in particular, has always had precise knowledge of our newsstand clients and how well the readers would receive any changes to our newsstands’ delivery schedule,” said Little. “This kind of knowledge is born out of love for the job and care and concern for the readers.”

Throughout the years the Munsons have been delivering the papers, they’ve had quite a few hobbies on the side. For decades, Dalton enjoyed whittling cedar kindling and selling it on the honor system by the side of the road.

“Someone comes along and they need it, they just put money in a little box,” said Dalton, who recalls one time someone paid part of their tab with a scratch ticket worth $2.

“Another time someone had taken some wood and left a note saying they couldn’t pay, and would come back the next day,” said Edith. They were true to their word, too.

“I’ve had excellent, excellent results with the honesty of people,” said Dalton. “People have appreciated being able to get it when they needed it.

It’s not just delivering the newspaper — the Munsons do a lot of their hobbies together. For seven years, they sang with a traveling group called the Sunshine Singers. “We went to Canada and sang in nursing homes, all different places,” said Edith. They also play cribbage together with a cribbage club that meets every Monday night at the Bluebird Ranch Family Restaurant in Machias.

But some of their hobbies do differ.  “She does crochet, crossword puzzles, and watches cop stories on TV,” said Dalton.

“I like sports, news, weather, stuff like that,” said Dalton, adding their simple solution. “We have our own TVs.”

In the four decades since they joined the newspaper, Dalton said the quality has gone up and down. “They’re doing a nice job now,” said Dalton. “It looks good.”

“Over my 41 years, I’ve never worked for any finer people than the people who've owned this business,” said Dalton. “Everybody that has been here have been just wonderful people to work for.

“I guess they liked us cause they kept us on!” 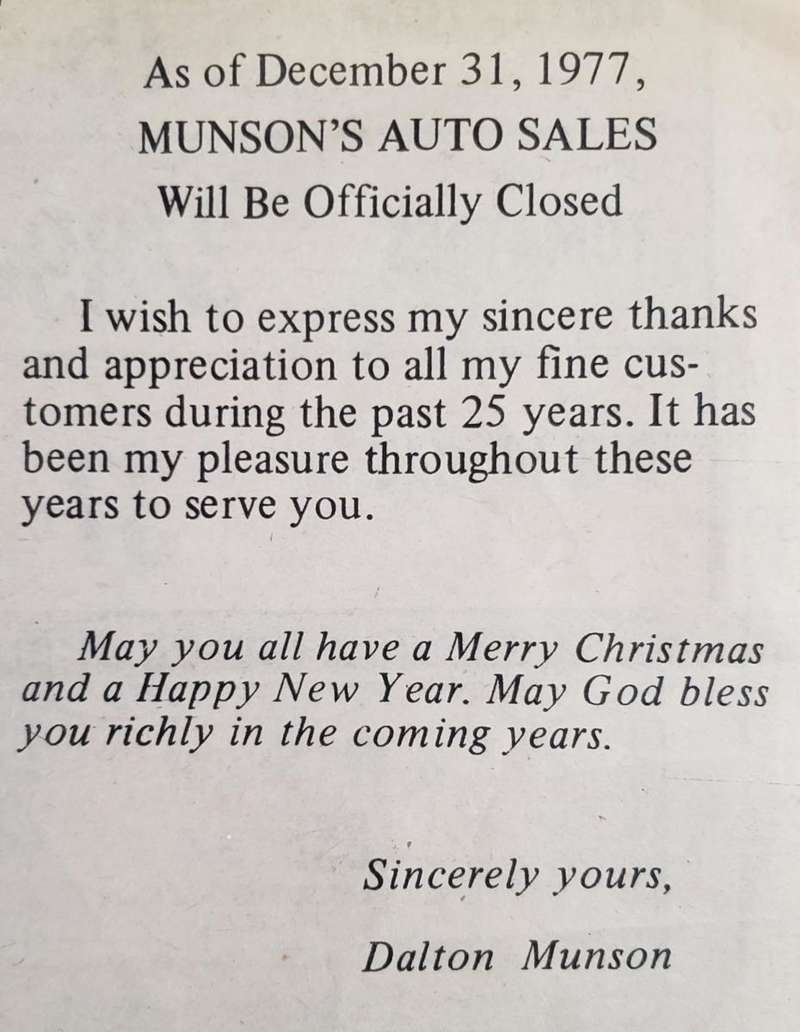 In late 1977 Dalton Munson ran this ad announcing the closure of his 25-year-old auto sales business. Not many months later he was hired to deliver the Machias Valley News Observer, which he continues to do 41 years later. 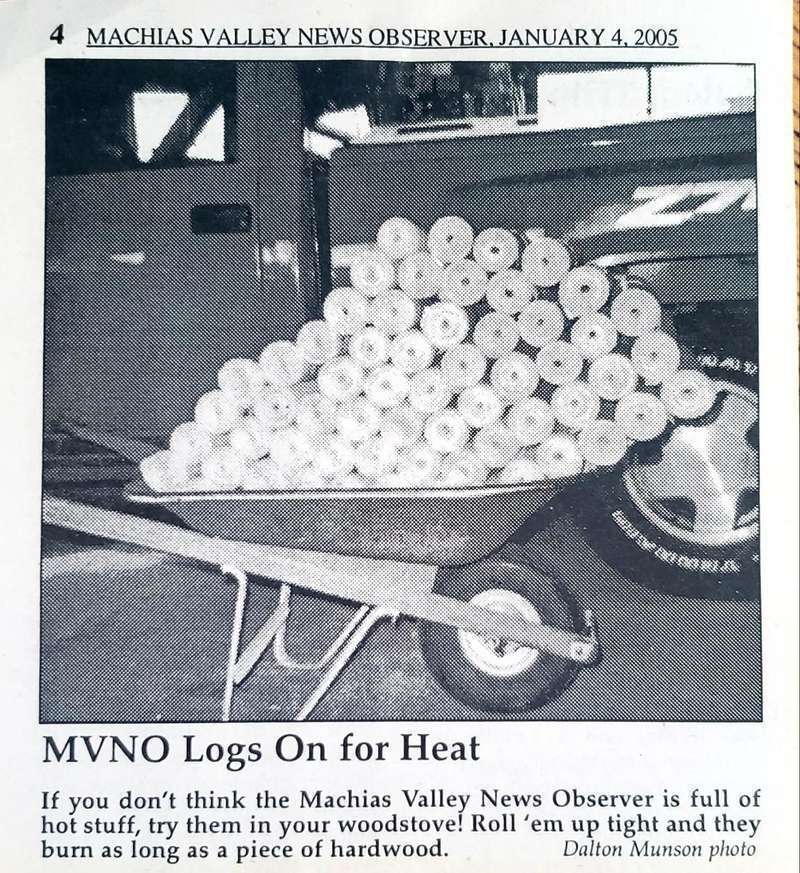 In addition to selling cars and hubcaps, Munson has always maintained a kindling business on the side of the road. This picture shows extra newspapers he rolled into tight lots. Munson said they burn as long as a piece of hardwood.