The awards were presented Saturday night at the DoubleTree by Hilton Hotel in Portland, concluding a day of workshops and networking for reporters and photographers, journalists, advertising staff, and designers throughout the state.

Publisher Pierre Little said he and his wife Wendy are very proud of both newspapers this year. “We have worked really hard, and we thank the Maine Press Association for these awards. We are dedicated to serving our readers each week with the most relevant and pressing coverage,” said Little. “Thirteen awards went beyond our expectations, but it indicates we are fulfilling our newsroom mission to serve our hometown communities well.”

In April, the MVNO was also recognized with the Machias Bay Chamber Chamber of Commerce 2019 Business of the Year award.

“I want to thank our editor Sarah Craighead Dedmon and our editorial teams at both newspapers,” said Little.

The MPA recognized MVNO journalist Nancy Beal with a second place award for her continuing coverage of the region’s small wild blueberry growers, and their quest to create better legislative representation in Augusta.

“This award should be shared with small wild blueberry growers Marie and Del Emerson who have championed the fate of Washington County growers for decades. Marie pulled me into this story. Her energy and knowledge, voiced wherever it was important to be heard, combined with the respect that Del has earned throughout years running the experimental wild blueberry farm in Jonesboro, plus legislative assistance from our state representative Robert Alley, led the move to expand the Wild Blueberry Commission last spring, giving more voice to the small and varied growers,” said Beal.

“I am proud for the chance to share their efforts with the public and hope that exposure of such issues, that only local papers can provide, helped bring about the successful conclusion,” she said.

During the conference, the MPA inducted three Maine journalists into the Hall of Fame: Stephen Fay, who recently retired after 23 years as the managing editor of The Ellsworth American; Marian McCue, longtime publisher and former editor of The Forecaster; and the late Christopher Cousins, a Statehouse reporter for the Bangor Daily News.

“I am very proud to have received these awards. I have always believed that the editorial and op-ed pages are the heart of any weekly,” said Leubecker. “And this weekly has steadily improved over the last few years. These pages have been a big part of this, and thank you to the MPA for recognizing that.”

Editor Sarah Craighead Dedmon took home six awards: for the editorial page, for her work covering Machias’ path to approving medical marijuana, for her story Chinese policy changes filter down to Machias recycling center, for her 2018 coverage of the unlicensed veterinarian operating in Machias, for East Machias preserves history and alewives at riverside smokehouse and for her front page photograph of the controlled burn at the former Blueberry factory at Middle River Park.

“It would be hard to overstate how strongly I believe in the importance of community journalism, and it’s a wonderful thing to see our passion for the news validated in these awards from the Maine Press Association,” said Dedmon. “When I first visited Machias 15 years ago, I was so impressed by the intelligence, vibrancy and community spirit reflected in the pages of the Machias Valley News. This, I thought, must be an extraordinary place,” said Dedmon. “I was right.”

Longtime MVNO sportswriter Phil Stuart was also recognized with a third place win in the category of Sports Columnist.

“This newspaper is a labor of love for so many: from our journalists, our columnists and our sports department, to our copy editors, our design team and office managers; from the Munsons, who deliver the news,, to our contributing photographers, book reviewers and and the people who share their stories with us every single week,” said Dedmon. “It’s a privilege to now be a part of the team that gets to fill these pages.” 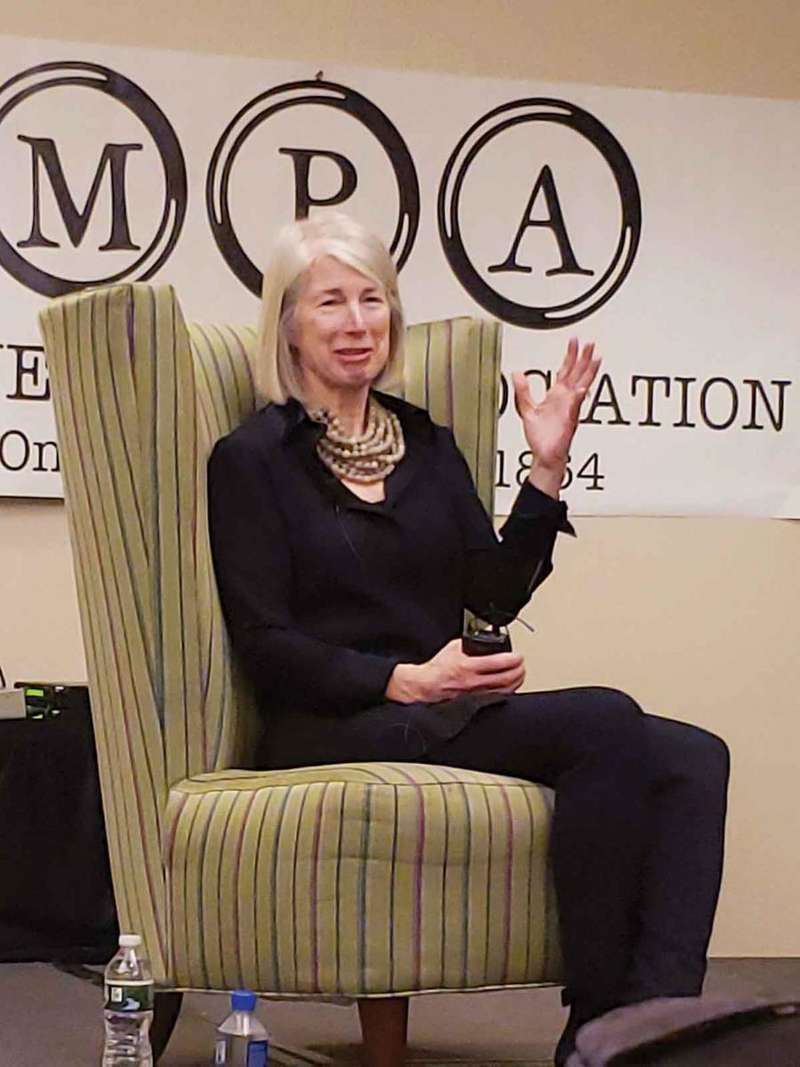 Lincoln County News Editor J.W. Oliver turned over his Journalist of the Year crown to Portland Press Herald journalist Eric Russell, who won the honors for 2019. Oliver took the helm of the MPA Board for the coming year. Photo by Sarah Craighead Dedmon