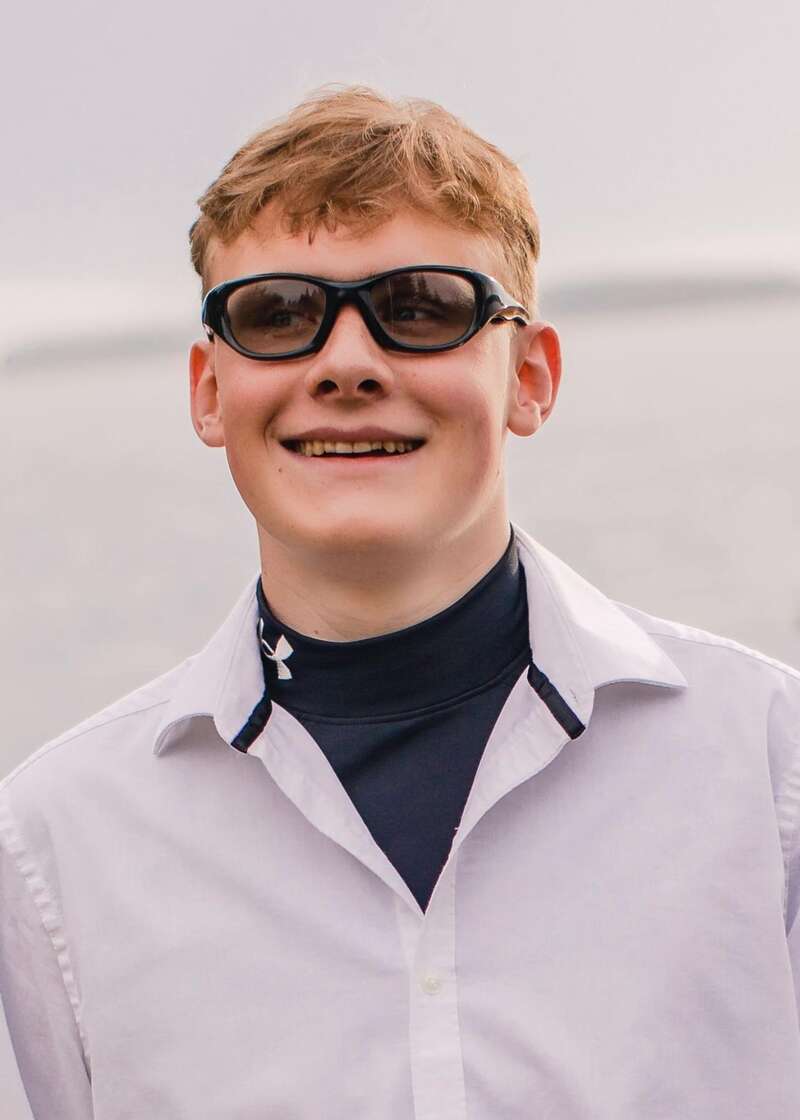 Noah Carver of Beals Island can be heard next week on National Public Radio’s “From the Top,” a prestigious NPR feature that celebrates young, classically-trained musicians. Photo courtesy Carver family

Local singer Noah Carver, 18, to perform on NPR’s ‘From the Top’

Local music lovers should tune in next week to hear a local son, Noah Carver of Beals, perform on National Public Radio. In recognition of his talents as a singer, Carver was selected to perform on From the Top, a prestigious radio program that celebrates young, classically-trained musicians.

The episode featuring Carver will be available to stream beginning Monday, May 30, on www.fromthetop.org, as well as podcast apps, such as Spotify or Stitcher. In Maine, his performance will be broadcast at 5 p.m. on Saturday, June 4, via Maine Public Classical, which airs locally on station WBQE 93.7 out of Milbridge.

It was Carver’s voice teacher, Gary Magby, who prompted him to apply when From the Top opened auditions in Maine last year.

“He got in touch with me and said, essentially, now is the time,” recalls Carver. “Get that application moving.”

One year, two Zoom auditions and several video submissions later, Carver was singing in a Boston recording studio, then interviewing with host Peter Dugan. For his performance, Carver selected Henry Purcell’s Music for a While, published in 1679, accompanied by Magby.

“It’s very old, written around Shakespeare’s time, but it’s kind of timeless, because it says, ‘Music for a while shall all your cares beguile,’” said Carver, now a senior at Washington Academy in East Machias.  “It’s appropriate for any time, really, but especially now when things are very fraught and difficult. People may have a lot more cares that need beguiling.”

With his From the Top Fellowship comes a scholarship, which Carver combined with a scholarship from the Jack Kent Cooke Foundation to purchase a valuable tool for college.

“Most musicians would use the scholarships to buy a new instrument or pay to go to a summer festival or program, like the Tanglewood Institute,” said Carver, who has been blind since birth. “I used it to buy equipment and software so I can transcribe braille music now, and I can compose notation, which is a game-changer for me.”

Carver will put that equipment to use this fall when he attends the University of Rochester’s Eastman School of Music. Initially directed there on the advice of Magby, Carver says he chose Eastman for its faculty and its size.

“Like many music schools, Eastman is a small community but also very compact which for me means easier to navigate around,” said Carver, a tenor. “The university was very supportive and excited and willing to work with me, regardless of the fact that I can’t see anything.”

It’s easy to understand why Eastman would leap at the chance to accept Carver into their program. His accomplishments are wide ranging and impressive, including a 2020 performance in the High School Honors Performance Series Carnegie Hall Concert Choir; multiple years, including this one, in the Maine All-State Concert Choir, and three years performing with the Washington Academy drama club, including his selection onto the Maine Drama All Cast for his performance as René Magritte’s father in This Is Not a Pipe Dream.

Carver has also traveled extensively, including singing in Europe with the Washington County Children’s Chorus, and traveling twice with famed No Barriers adventurer Erik Weihenmayer, once rafting the Grand Canyon and once hiking in Nepal.

He’s also an athlete and spent four years running cross country, the last three at WA, where this year he served co-captain and was named a Maine Scholar Athlete. An avid alpine skier, Noah also serves as a Maine Adaptive Sports and Recreation ambassador, helping train volunteers on guiding skiers who are blind and visually impaired.

Raised on Beals Island by parents Suzanne and Buzz Carver, Noah began high school in Jonesport but transferred to Washington Academy his sophomore year. He says he chose WA for the arts program and specifically for music teacher Bonnie Atkinson, whom he initially worked with on the Washington County Children’s Chorus, a free youth musical offering run by Chris and Doug Guy and now resuming practices.

“Mrs. Atkinson really was the main draw for me to come to WA,” said Noah. “The culture here is also very supportive of the arts, and that is fantastic in an area where all too often the arts take backstage and don’t receive the attention they should.”

Atkinson says Noah’s pure joy in music making is contagious to everyone around him.

“Noah is connected to whatever music he is singing. His whole being takes it in, and out comes musical magic. It goes beyond just perfect tone and singing the right notes,” said Atkinson. “His performances look effortless, but behind each of them is a consistent focus on proper technique and hours and hours of hard work and preparation.

“I hope that he knows that the Music Department at Washington Academy has not just been a place to grow and learn, but a musical home that he is always welcome back to.” 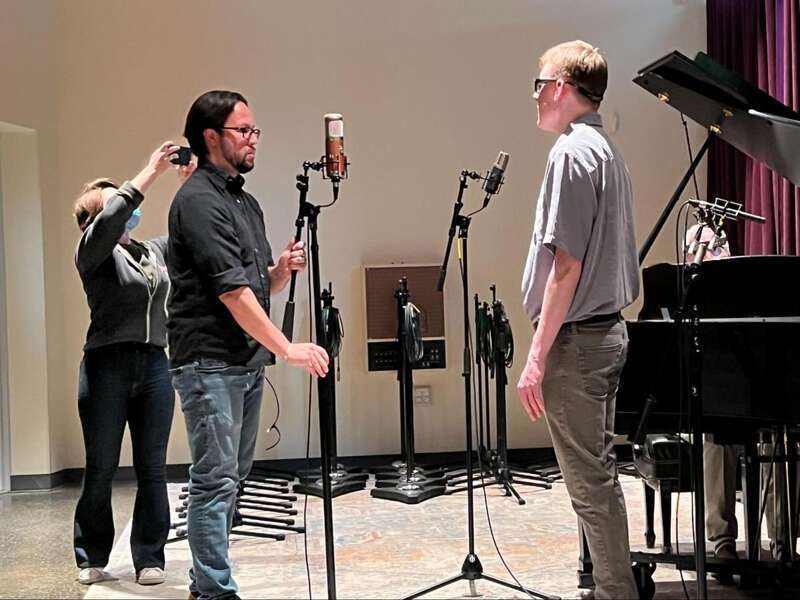 Seen here preparing for his From the Top performance, WA senior Noah Carver, 18, chose a 17th-century piece with relevance for today, Henry Purcell’s Music for a While. Listeners can hear the show online beginning Monday, May 30, or during Maine NPR’s broadcast Saturday, June 4. From left to right: From the Top video editor Libby Miserendino, sound engineer John Escobar, and Carver. Photo by Suzanne Carver 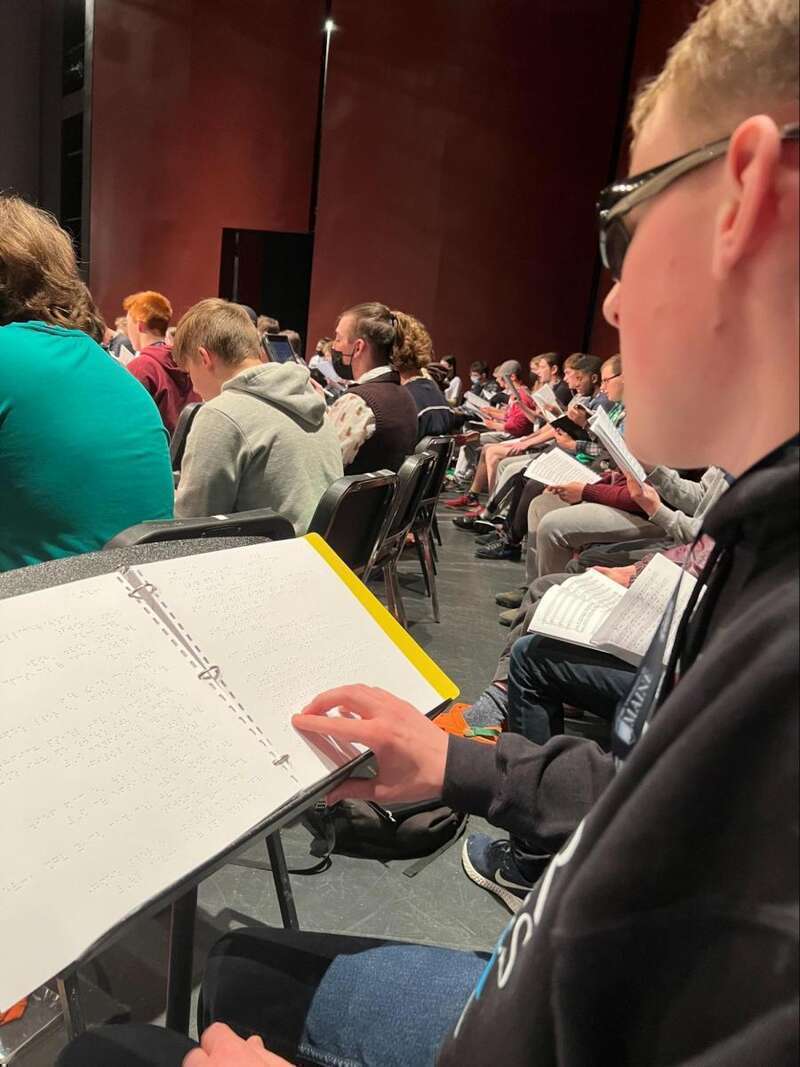 Noah Carver began learning to read music in braille during his freshman year, in preparation for his All State auditions. As he prepares to attend the Eastman School of Music. Funds from two scholarships have allowed Carver to purchase equipment and software to aid in braille notation, translation, composition, and printing. Photo by Suzanne Carver