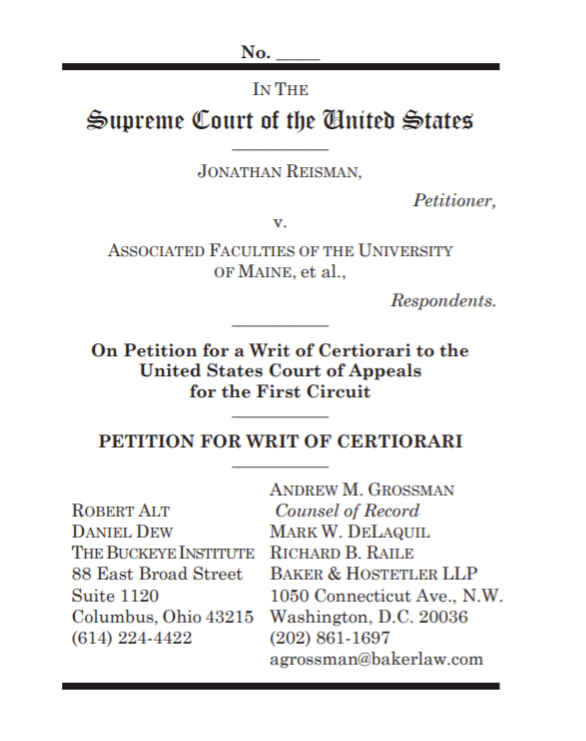 Originally filed in Maine, Reisman v. Associated Faculties of the University of Maine, et al was dismissed by the U.S. District Court in Bangor, and has been appealed to the Supreme Court of the United States. Reisman’s attorney, Robert Alt, said that the Supreme Court signaled it would like to further explore issues of union representation and First Amendment rights in their June 2018 Janus decision.

Local professor’s lawsuit on appeal to US Supreme Court

A case originally filed in Maine is on appeal to the U.S. Supreme Court.

By state law, AFUM is the only entity that can represent full-time faculty in collective bargaining for terms and conditions of employment, and Reisman said that lack of free choice is the central reason for his lawsuit.

“The union still has the ability to be my exclusive representative, and I’m still associated with the [political] positions that they take,” said Reisman. “If the court rules in our favor, then exclusive representation will end, and if somebody was not a member of the union, they could negotiate for themselves.”

Before the U.S. Supreme Court ruled on Janus v. AFSCME in June 2018, public employees could opt-out of union membership, but they still had to pay the union a fee to cover collective bargaining activities.

The Janus decision eliminated the fee requirement, but Maine’s University of Maine System Labor Relations Act stipulates that the union represents all university employees in collective bargaining and grievances. Reisman cannot represent himself, nor seek another representative.

Reisman is challenging the constitutionality of that statute.

“In this case, under the law of Maine, it’s perfectly clear Professor Reisman has no choice. Whether he agrees with them or not, as a matter of law [AFUM] are his representatives,” said Robert Alt, president and chief executive officer of the Buckeye Institute and one of Reisman’s legal team, noting that Janus freed Reisman from membership in the union and the accompanying fees.

“But to my mind, the issue we’re facing here is even a clearer violation of his First Amendment rights,” said Alt. “Can Professor Reisman be forced to speak through a union as his exclusive representative if he chooses not to?”

Reisman has worked at UMM since 1984 and is now UMM’s Assistant Vice President for Academic Affairs and Associate Professor of Economics and Public Policy. He also has a lengthy political history, too, working for then-Democrat Angus King in the early 1990s, and running for Congress on the Republican ticket in 1998. He has also served as a union grievance officer, and said he has no particular complaint about his local union.

AFUM is affiliated with the MEA and NEA, and Reisman was unhappy to learn of their political support for 2016 referendum Question 2, which asked voters to approve a 3 percent tax on household income over $200,000, with the proceeds to support education.

“I knew MEA members had put it forward, but I didn’t know they supported it,” said Reisman. “They’re active in state government, it’s not always obvious to people.”

Reisman v. AFUM was originally filed in August 2018 and was dismissed in Dec. 2018 by U.S. District Judge Jon Levy. That decision was appealed to the 1st Circuit Court of Appeals in Boston, which upheld Levy’s decision in Oct. 2019.

Speaking for the University of Maine System (UMS), Director of Public Affairs Dan Demeritt said the system’s most important stake in the litigation was to ensure that it follows Maine law.

“In upholding Judge Levy’s decision to dismiss Professor Reisman’s complaint against UMS and its codefendants, the U.S. First Circuit Court of Appeals affirms that UMS has done so in managing its relationship with its faculty union,” wrote Demeritt.

In the appeal court’s decision to deny, Judge David Barron said that Maine’s statute contains provisions which protect non-union employees from discrimination and that the statute requires the union to bargain on behalf of all “employees within the unit without regard to membership in the organization.”

“Considered in context, then, [Maine state law] is not properly read to designate AFUM as Reisman’s personal representative, as he contends,” wrote Barron.
Reisman’s legal team filed an appeal to the Supreme Court of the United States on Jan. 2, and Alt said he expects an update to their case before March. Demeritt said UMS will continue to monitor the case and respond further if the Supreme Court requests additional information.

“What happens if Reisman wins is individual freedom for workers, and choice,” said Alt. “It’s not that the unions go away — they have the opportunity to thrive, but they have to do so through consent.”

Editor’s note: Jonathan Reisman is a weekly contributor to this newspaper’s opinion pages.