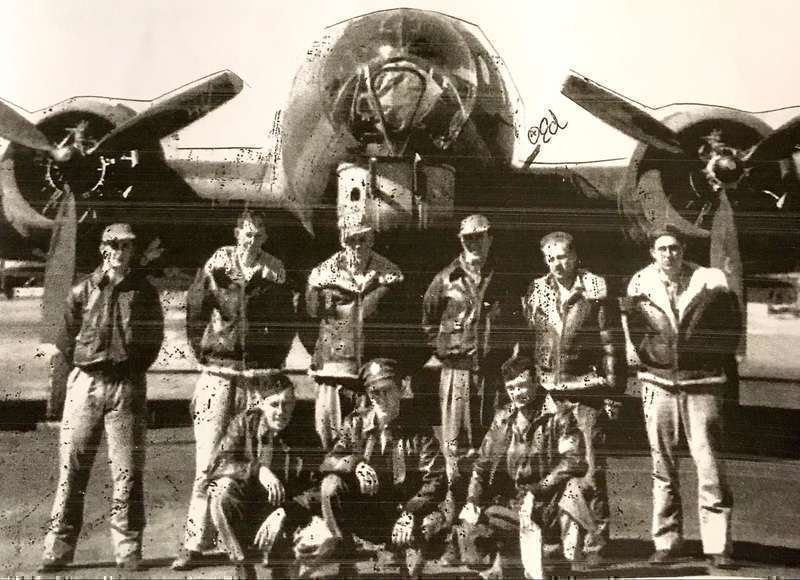 The life and times of Edward K. Browne

Renowned local veteran Edward K. Browne turned 100 years old last week, and was celebrated at the Machias Veterans’ Home where he lives today. Last fall, Nancy Lebo sat down with her friend Ed and wrote this essay documenting his experiences in WWII.

This is the life of Edward K. Browne, WW II veteran who was captured and held in a German prison camp for 10 months.

The story of Edward’s life began on June 25, 1919, when he was born in New York City. Ed had two younger brothers and one sister and as the oldest has outlived them all. In January 1942, at the age of 18, Edward was drafted from his home in Morris, New Jersey. He trained in Shreveport, Louisiana, Las Vegas, Oklahoma, and Pyote, Texas until he was deployed in February 1944. Edward always wanted to be a navigator but missed the distance so he was then training to become a gunner who served two-and-a-half years in the Army Air Corps.

Ed’s position on the aircraft was a waist gunner which is in the rear of the middle of the plane. Gunners were positioned throughout the plane. According to Ed and those I have spoken to, being a crew member of a B-17 Bomber is the most terrifying job. Not many B-17 crew members survived the war.

On Ed’s eighth mission, the plane was shot down by the Luftwaffe on May 12, 1944 in the south of France on the Main River with ten men on board. As the plane was on fire, they all were told not to open their parachutes until they were out of the reach of the burning aircraft. All of the men survived and were captured and put in German prison camps. Ed says that they were treated okay if they behaved and listened to those in control. If any tried to escape, they would have been shot. There were 300 U.S. soldiers held in the camp at the time, and the designation was V4D. Generally, there were four prisoners in a barracks. Ed recalls that they were adequately fed in the camps. The Red Cross sent parcels with tea, cocoa, cans of tuna, cans of salmon, biscuits and, of course, Hersey bars. The Salvation Army also sent parcels of clothing. I asked whether you were allowed to receive these parcels, and were you allowed to send and receive mail from home, and Ed replied yes, it was done according to the Swedish Legation, which is neutral according to the Geneva Convention.

On February 8, 1945, they left on a long cross-country march, about 360 miles on foot. Ed recalls that civilians gave them potatoes and bread along the way or, he states, they would have starved.

The Russians liberated them at the Elbe River the day the war ended on May 7, 1945. Ed said that in Torgau, where they were recovered, they got sick from overeating.
They departed France on an ocean liner headed to the U.S. and listed as “high priority” due to their status as prisoners of war. The liner docked in New York Harbor and they came home to a hero’s welcome. Ed said his father, Edward K. Brown, Sr. was waiting for him, as Ed had no sweetheart at the time of his induction in 1942.

Ed was suffering from malnutrition and took several months to overcome his fatigue from lack of food. Ed ended his career as a Buck Sergeant and was offered a Purple Heart, though Ed declined as he thought he was not deserving of one.

Ed’s journey then took him to Alaska after he recuperated, where he met his first wife Ruby Green. As Ed said with a grin on his face and a gleam in his eye, “She was a Green, and now became a Browne.” They were married for 23 years until her death. Ed and Ruby had two children, and Ed worked in Fairbanks, Anchorage and Juno as a soil technician and timber grader until he retired in 1986. Ed also married again in 1989 to Margaret, and then later moved back to Concord, New Hampshire.

He and Margaret traveled back to Germany for one month. Ed said that as he went back in time, many bad memories surfaced for him. All in all, he did enjoy returning to Germany.

It is my true delight to give praise and thanks to our Lord for allowing this special man to live 99 years and be able to recall his time spent in the service of our country The Lord allowed us to meet in Jacksonville, Maine at church, and I will always treasure my time with Ed as my new pen pal and special friend as we look forward to celebrating his 100th birthday on June 25, 2019.

The Nature of Phenology: Moss