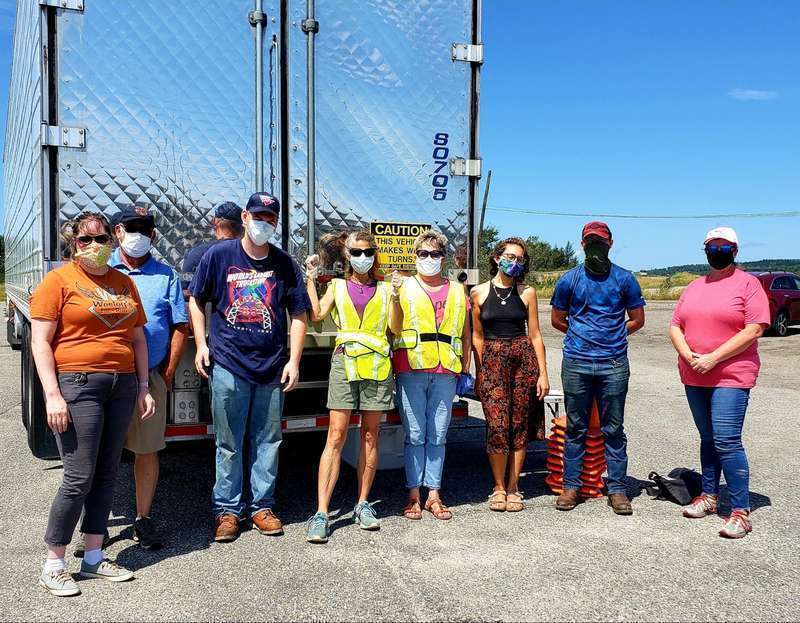 A line of cars wrapped around the Lee Pellon Center in Machias as people waited for a tractor-trailer to open its doors on Wednesday, Aug. 5. When the clock struck 11 a.m., volunteers began bucket-brigading free boxes of food into the waiting vehicles. Before an hour had passed, 900 boxes were gone.

“Based on the faces I see when I give people these boxes, and the thanks and the gratitude that I’m hearing, people are really struggling right now,” said Regina Grabrovac, who is managing the food box distribution in Washington County. “People don’t have work, or if they have work it’s not sufficient.”

As food program manager for Healthy Acadia, Grabrovac is often found at the juncture between food and the local people who need it. This summer, every Wednesday finds her making box deliveries in Princeton and Calais one week, then Machias and Harrington the next. By the end of August, that will equal 182,000 pounds of free food poured into Washington County. Moving that much food requires a lot of willing volunteers, and more are needed.

“If people want to come to help out with the distribution, we need people in Princeton, Calais, and Harrington,” said Grabrovac. The Machias volunteer roster is already fully staffed.

The food boxes are funded by a Farmers Feeding Families grant from the U.S. Department of Agriculture, secured by the Maine Farmers Exchange in partnership with Catholic Charities, who reached out to Grabrovac to handle distribution in Washington County.

The Farmers Feeding Families program was developed specifically to address hunger caused by the pandemic, but Grabrovac believes it’s serving people who were hungry before the pandemic, too.

“I feel that we’re reaching people who would never have reached out for food before, and even now they aren’t reaching out because they don’t feel safe to do so,” said Grabrovac. “We’re reaching them because there are people who care enough to make that delivery to their door.”

Staying in to protect themselves from COVID-19, elderly and housebound locals are receiving boxes through the kindness of friends and neighbors who collect them in town and deliver them here, there, and everywhere. Though Catholic Charities has capped the boxes at 20 per vehicle, below that there is no limit, and no questions asked. Any and all are invited to pull up and take a box, a stigma-removing strategy that has also worked well in Milbridge where all are invited to harvest from the Milbridge Commons organic vegetable gardens.

The Farmers Feeding Families grant is also designed to support local farms, so the food inside the boxes was grown in Maine, with each containing five pounds of potatoes, six pounds of microwaveable mashed potatoes, two and a half pounds of cheddar cheese, and one-half gallon of 2 percent milk. Pineland Farms and Michael Foods are the farm suppliers, and all of the boxes are packed in Aroostook County.

Grabrovac will have overseen seven consecutive weeks of deliveries before months end, and there’s hope that the program will continue into the fall and winter months, too.

“There’s a good possibility that this will continue through December,” said Grabrovac. “We know that we’re being included on the next grant request for September and October.”

Upcoming box distributions will take place in Princeton on Aug. 12 in the Freshies parking lot, 114 Main Street, from 10 a.m. to noon, and then in the Calais Tradewinds parking lot on the same day from 2 to 4 p.m. In Machias and Harrington, the next pickup will be Wednesday, Aug. 19 at the Lee Pellon Center parking lot from 11 a.m. to 1 p.m., and then at the Narraguagus Jr/Sr High School parking lot from 2-4 p.m.

Boxes are distributed on a first-come, first-serve basis, and are often gone in less than two hours.

Coming into the final weeks of the growing season, Grabrovac is also hard at work on Healthy Acadia’s gleaning program, which harvests food from local farms and delivers it to Downeast food pantries. The program has recently received some good news on that score.

“Healthy Acadia has been fundraising for a harvest truck, and we’ve exceeded our goal,” said Grabrovac. “We’re very excited about having a dedicated vehicle. We estimate that we leave behind 10,000 pounds of food in the field every year because of a lack of transportation, so we’re looking forward to seeing that [harvest] increase.”

The fundraising efforts yielded roughly $30,000 for the truck, which will be used primarily to collect from farms located in Hancock County, as Grabrovac uses her own vehicle here. Fresh food harvested by the gleaning program is delivered to local food pantries.

This year the gleaning program is a little less robust. Springtime COVID restrictions limited planting, so the gardens at Washington Academy are roughly half what they normally would be.

“Most of the gleaning is coming from Folklore Farm in Cherryfield right now, and from the Washington Academy garden, which has been co-managed with Majorie Parenteau with the cooperative extension,” said Grabrovac.

Right now they’re harvesting kale and garlic and soon they’ll deliver onions, tomatoes, winter squash, and carrots to local food pantries. “We deliver to Machias, Jonesport, and sometimes Eastport and Lubec. We try to spread it around,” said Grabrovac. 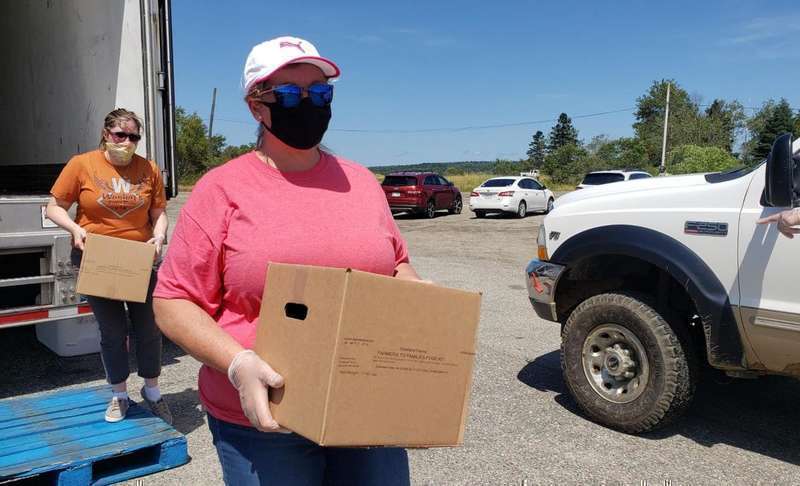 Volunteer Patty Wallace leads the way, carrying one of the free food boxes distributed in Machias last week. All of the food is grown in Maine, and by the end of the month, volunteers across the county will have hoisted 182,000 pounds of it. Photo by Sarah Craighead Dedmon