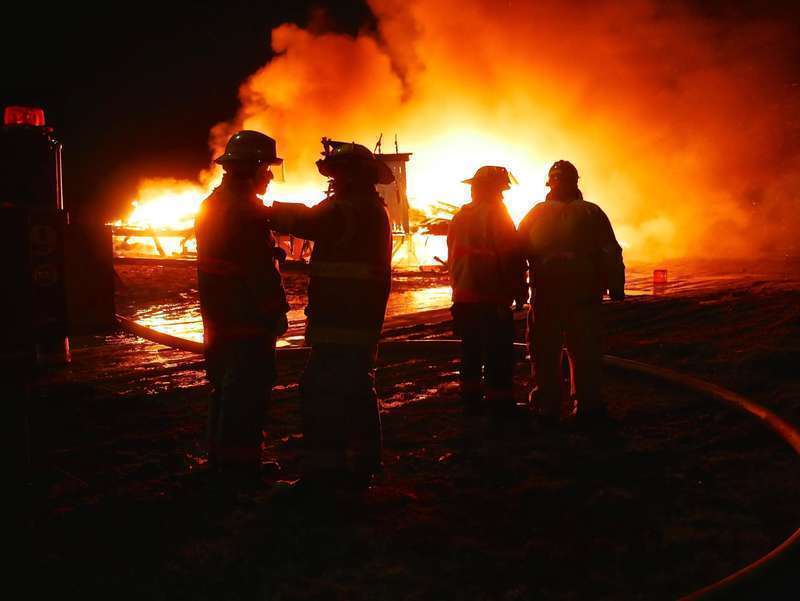 Toxic and carcinogenic chemicals from structure fires like this controlled burn in Machias have led to a nationwide increase in cancer and heart disease among firefighters. Area fire departments have purchased special equipment that will remove the carcinogens from firefighters’ gear. The units were installed at the Machias Fire Department last week. Photo by Bill Kitchen

“The water that came out of the extractor...was horrendously black, it was some of the dirtiest water I think I’ve ever seen,” said Bowker.

The Marshfield Fire Department began fundraising for the project in 2018 and was later joined by the Machias, Jonesboro-Roque Bluffs, East Machias, and Machiasport volunteer fire departments. All five departments will now share the equipment, which is installed at the Machias Fire Department. It will be operated by the town’s two dispatchers and area fire chiefs.

“The biggest thing I want to say is ‘thank you’ to the people who donated, it’s been a long two years,” said Bowker, who also wrote grants for the cancer prevention project. “The firefighters appreciate the community’s support. Now that we have [the equipment], we’re safer for it.”

Smoke created by burning manmade materials like plastic window casings is blamed for an uptick in cancer deaths among the nation’s firefighters. According to the National Fire Protection Association, two studies show firefighter cancer diagnosis rates are 9 percent higher than the general population, and cancer deaths are 14 percent higher. Firefighters are also at elevated risks for heart disease and heart attack.

Through a GoFundMe page, public suppers, town contributions, and written appeals, the combined fire departments raised almost $20,000. All of the money raised for the Cancer Prevention Fund was used to purchase the equipment or pay for cancer-prevention training.

Firefighters wear breathing apparatus to protect their lungs, but deadly chemicals continue to off-gas from their clothing for days after a fire. Most local fire departments have a standard home washing machine for firefighter use, but turnout gear cannot be put into a conventional home dryer, and most importantly, a firefighter cannot wear wet turnout gear to a fire. Before the extractor, local firefighters were out of commission for the three days as they waited for their gear to hang dry.

The new machines take only six hours to wash and dry three sets of gear. With 25 to 30 firefighters responding to any given blaze, Bowker estimates every single firefighter’s gear could be cleaned in two days. As an added benefit, instead of releasing carcinogens into home septic systems, the dirty water will be treated by the Machias wastewater facility.

“The beauty of this machine is that it uses...two different types of soap designed for washing fire gear specifically. One is an actual detergent, the second one is a sanitizer,” said Bowker. “With the events that are going on, if we wear our gear we can actually sanitize it.”

The units were delivered earlier this year but installation was delayed due to the coronavirus pandemic. Bowker says springtime is training season for the fire departments, but social distancing requirements led to the cancellation of four different trainings. New coronavirus firefighting guidelines “significantly complicate things.”

“We’re trying to maintain social distancing, but it’s hard when you’re trained to be close together,” said Bowker. “There’s definitely a heightened awareness during the call.”

Want to open a child care business? Now might be the time