In 1973 I got my driver’s license, purchased a 1966 Delta 88 (8 miles/gallon) for $500 with my saved paper route earnings, drove it to Waterville, Maine, to start college, and watched the price of gasoline double to $.70/gallon during the first OPEC oil embargo. America had gasoline rationing and long lines at gas stations. President Nixon was hobbled/distracted by Watergate, and the country seemed to be paralyzed.

I started out at Colby as an environmental studies major, and I spent my first several years studying energy and transportation-related issues. In work that probably foreshadowed my conservative future, I wrote papers on nuclear power (thumbs up) and Amtrak (thumbs down) that earned Honors grades but probably gave my environmental studies activist professors pause. The big environmental fears of the day were global cooling, nuclear power, and overpopulation. In my sophomore year, I took Principles of Economics and found my calling, adding economics as a second major. I still remember the somewhat astonished reaction my double major combination evoked as I walked across the Mayflower Hill graduation stage.

I decamped to Providence for graduate economics work at Brown. The second OPEC act of aggression doubled the price of gas again. Stagflation, the Iranian hostage crisis, and the inept leadership of Jimmy Carter (elected partially in response to Watergate and Gerald Ford’s pardon of Nixon) made for dark days in the country and much analysis of energy policy within the Brown economics department.

The consensus view was that energy was the “Master resource” and that while OPEC was a problem, it was government price controls and environmental and market regulation that was really damaging the economy and our long-term prospects. I still remember driving home from teaching a Tuesday night class at Bryant College (now University) in November 1980 and hearing that Ronald Reagan had been elected President, and wondering if our long national energy policy nightmare might be over. President Reagan put it on hiatus, but his successors (of both parties), coupled with the rise of climate alarmism, have returned us to energy policy malpractice and reliance on hostile foreign powers for energy.

This graphic from the Wall Street Journal shows how Reagan unleashed American oil production in response to OPEC, and how Biden has done precisely the opposite in response to climate alarmism. President Biden has kept his promise to prosecute a war on fossil fuels by leasing the fewest amount of federal acres for production in 60 years, less than 1/50th of what President Obama permitted. 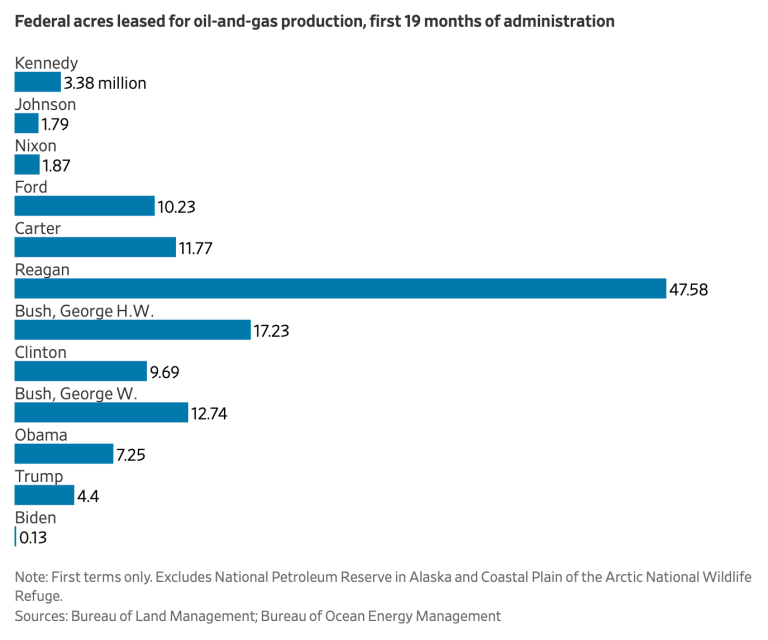 This second graphic shows just how deluded the climate alarmists pushing wind and solar and the war on fossil fuels are: 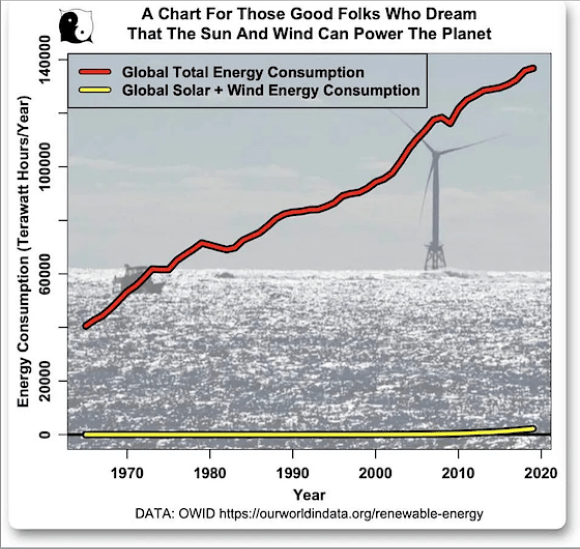 Stagflation is a miserable combination of a rising price level (inflation) coupled with falling GDP (recession). The cause of stagflation is adverse reductions in aggregate supply, and energy price increases were one of the primary causes (along with irresponsible fiscal and monetary policy) in the 1970s and remain so today. Some of that is and was OPEC’s fault. However, most of the blame today should be squarely placed on the climate alarmists and their Democrat Party co-religionists.