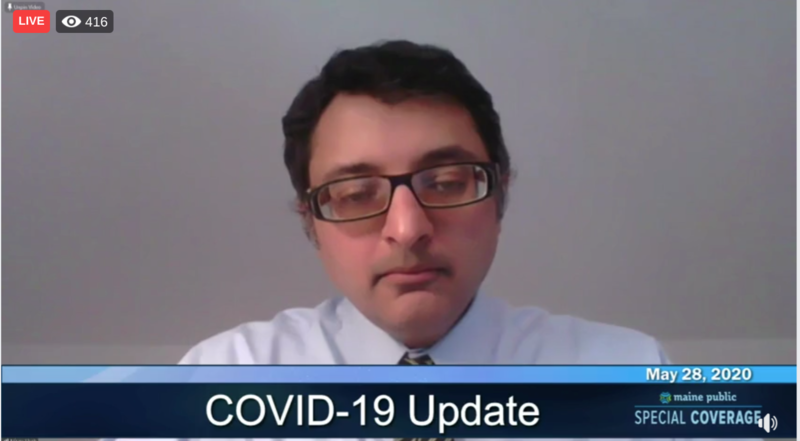 Maine Center for Disease Control and Prevention Director Dr. Nirav Shah last week said the state’s “point positivity rate” has decreased to 3.5 percent from 4.1 percent the week prior. The number measures the ratio of positive cases detected to tests conducted. The state seeks to lower that number to below 2 percent. Photo courtesy Maine Public

Maine’s rate of testing for COVID-19 increased almost 20 percent last week, according to Maine Center for Disease Control and Prevention Director Dr. Nirav Shah. “We’ve still got more work to do ahead of us, but if we take a look at what we saw in those tests done in the past week we see that we are heading in the right direction,” said Shah.

A lack of testing supplies has been a defining challenge during the coronavirus pandemic, a situation Maine was able to improve through a partnership with Westbrook-based IDEXX Laboratories, which has increased the state’s weekly testing supply capacity by roughly 3,000 tests.

Increased testing is key to helping health officials track the spread, or decline, of coronavirus in Maine, and its abundance is reflected in the “point positivity rate”, now considered a key indicator of whether a state is safe to fully reopen. A low point positivity rate, at or below 2 percent, indicates widespread testing, sufficient to ensure states are not focusing their testing around known clusters of the virus, but casting a wider net, and therefore discovering more cases.

Maine releases its cumulative test numbers each Wednesday. As of last week, the state had performed a total of 64,362 tests, including 59,552 of the traditional molecular “swab” tests, and 4,810 antibody tests. Shah said Maine’s point positivity numbers are trending in the right direction, now at 3.5 percent.

“This is that number that I’d like to drive down as low as possible. We’ve made significant strides,” said Shah, citing a 4.1 percent point positivity rate one week earlier. “That drop tells our team that we are headed in the right direction when it comes to testing, the volume of testing, and the fact that we are catching as many potential positives as we can.”

In the weeks leading up to May 25, research by this newspaper indicates that no more than 300 COVID-19 tests had been performed in total in Washington County this year, a low number attributable — at least in part — to constrained supplies and a rigid tiered testing protocol designed to ensure tests were used strategically.

There is no charge for a COVID-19 test processed by the state laboratory in Augusta, though there may be a charge for the local office visit required to perform the test.

Supplies are still limited on PPE (personal protective equipment) says Dwelley, who believes the CDC and Maine EMA have done a “good job” with what has been available to them.

“Throughout the last couple of months we’ve processed a little over 125 PPE requests for everybody from nursing homes, to ambulances, to clinics to congregant living facilities,” said Dwelley. “We’ve processed them all. Not everybody got everything they wanted, but most got a portion.”

Washington County’s known COVID-19 case count has held at two since early April, and both cases have been listed as recovered. Last week that number dropped to one. CDC Spokesperson Robert Long said that a routine review by the Maine Division of Disease Surveillance determined that one individual listed as a Washington County case did not meet the COVID-19 case definition because the test that indicated that person was positive for COVID-19 is not FDA-approved.

Throughout the pandemic Maine CDC has reported positive case data only at the county level, making Maine an outlier in New England where all other states report cases by town or zip code. Shah has said concerns over privacy held the state back from releasing more specific information.

“The concern is the possibility for identifying potential people who may have been affected by COVID-19...particularly in communities where that identification could have serious privacy implications, and that’s a concern I take very seriously,” said Shah.

Last week the state began reporting cases by zip code except for three exceptions: in zip codes with fewer than 50 people; in zip codes with five or fewer cases; and in counties where total case counts are low enough that zip code data could indirectly reveal the identity of a case, all zip codes in the county are suppressed.

MFOIC attorney Sigmund Schutz in April wrote to the state requesting the data, saying that access to more information would have direct public health benefits and could enhance public confidence in Maine’s coronavirus response. Last week he said he was pleased the state has complied with the request.

“Detailed information collected by Maine CDC on where COVID-19 cases have been detected should have been made public a long time ago,” said Schutz. “The state’s news reporters and open government advocates deserve credit for challenging unnecessary government secrecy and protecting the public’s right to know. I’m hopeful that the state will keep this information updated and provide information on active cases, not just the total number of cases reported so far.” 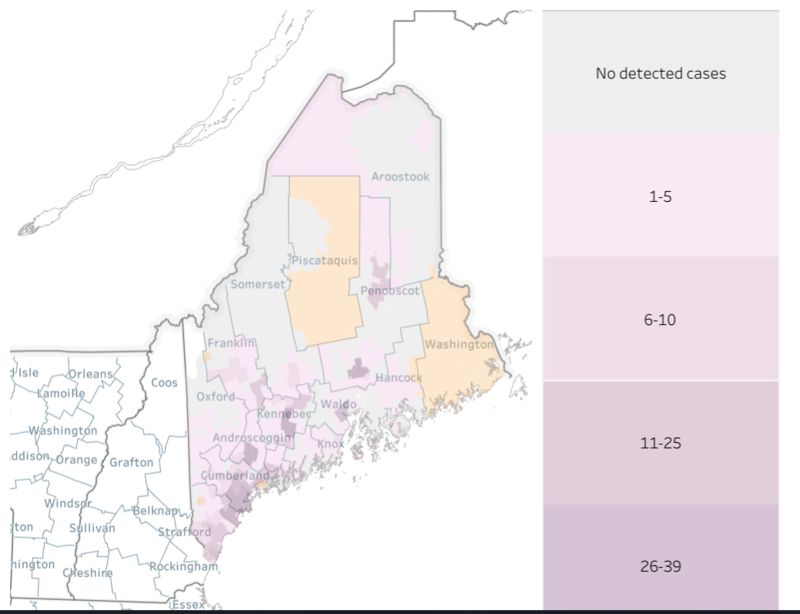