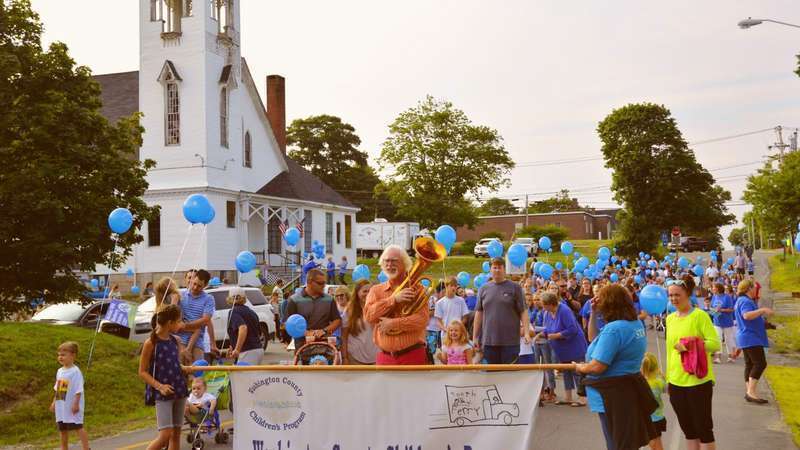 Fans of the Machias Wild Blueberry Festival will have to forgo their August celebration for a second year in a row. Organizers announced cancelation of the 2021 event on Friday, April 9. Photo by Sarah Craighead Dedmon

The Machias Wild Blueberry Festival will not happen for the second year in a row due to the COVID-19 pandemic, festival organizers announced today, April 9.

“It was a hard decision. We really just did not see how we could safely put on a festival,” said festival committee chair Ellen Farnsworth, pointing to festival events that take place in close quarters, like the blueberry musical. “That couldn’t have happened. Even the vendors, how could we guarantee that we were keeping our vendors safe? There were just too many things.”

Organizers of the Maine Lobster Festival, a large event held in Rockland in July, also canceled their event for a second year, citing pandemic concerns. Other large summer events, such as the Maine Boat and Home Show in Rockland and the North Atlantic Blues Festival, are tentatively scheduled to proceed. The Common Ground Fair, held in September in Unity, is also scheduled to proceed.

A letter to church members sent this afternoon by Farnsworth and Centre Street Pastor Susie Maxwell said state COVID-19 guidelines needed for so many festival events made it "impossible" to ensure safety.

"We know this is a deep disappointment on so many levels and we too feel sad for and along with our guests, our vendors, and our local businesses," wrote Farnsworth and Maxwell.

New state guidelines released March 5 maintains capacity limits currently set at 50 people indoors and 100 people outdoors in spaces such as tents, provided 6-foot distances can be maintained within the space.

Facilities such as restaurants, which have set capacity limits, may utilize 75 percent of their space until May 23, then 100 percent after May 24. Because six-foot setbacks still exist, 100 percent may not mean that restaurants can return to their full seating capacity.

Founded by Centre Street Congregational Church in 1976, last year would have been the 45th Machias Wild Blueberry Festival, which traditionally takes place on the third weekend in August. Farnsworth said the planning committee will now explore smaller recurring events which could also attract people into Machias, such as Sunday afternoon concerts on the church green.

“We could encourage concert-goers to go to local restaurants to pick up their lunch, then come to the green,” said Farnsworth.

Climbing COVID-19 case counts in Maine and nationwide factored into the committee’s decision. In March, state case counts had decreased to between 100 and 200 per day. In the past two weeks, however, those numbers have more than doubled again, with Thursday’s new positive case count at 438.

“It was a really hard decision,” said Farnsworth. “For awhile we thought things were looking better and we could maybe pull this off. Then things stopped looking better, we waited just as long as we possibly could.”

Farnsworth says the festival website will continue to showcase ads from its sponsors, at no charge, for the second year.

“We did not charge them a sponsorship fee in 2020 and we will not in 2021 but we will continue to run their ads for them so that anybody who visits our website will see the businesses that support us,” she said.

“We certainly recognize how difficult this is for the entire community, particularly the business community in Machias.”