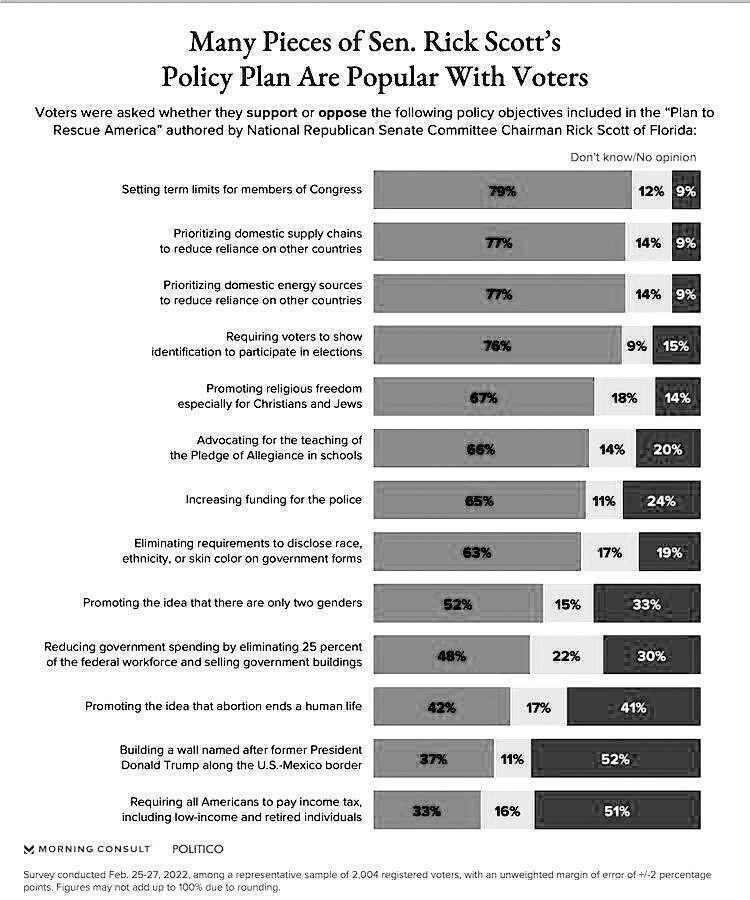 The alternative to Not Brandon

In 1994, Newt Gingrich led House Republicans out of 40 years of minority status with the Contract for America. Those mid-term elections pushed President Clinton back to the middle (like Brandon, he had run as a moderate but governed as a leftist) and set the stage for welfare reform, an actual budget surplus, bi-partisan policymaking, and political pluralism, where no one party was assumed to have a permanent monopoly grip on power.

The upcoming 2022 mid-term looks to be a Republican tsunami, principally because of the border, inflation, Afghanistan, energy prices and climate alarmism, the Biden crime family, Brandon/Harris malevolence/incompetence, and the accurate perception of media malpractice and social media censorship. Running as “not the other guy” worked for Biden and the Democrats in 2020, but it does not provide much of an agenda or mandate for governance (as Brandon’s reversal of Trump’s border, energy, and foreign policy positions and the resultant disasters suggest). Winning the election and governing successfully thereafter (as well as re-election) is more likely with a positive campaign and agenda. It is even better if a positive plan highlights the faults and miscues of your opponents.

Enter Florida Senator Rick Scott, who is leading GOP efforts to retake the Senate and put a stop to the selection of federal appointees based on color, gender, and woke ideology. Senator Scott has fashioned an 11-point Plan for America that echoes Newt’s Contract and drives the Deep State, the Dems and their media mouthpieces crazy, not to mention establishment Republicans like Senator McConnell who would prefer not to hand the peasants any pitchforks.

1. Education. Our kids will say the pledge of allegiance, salute the Flag, learn that America is a great country, and choose the school that best fits them.

We will inspire patriotism and stop teaching the revisionist history of the radical left; our kids will learn about the wisdom of the US Constitution, the Bill of Rights, and the founding fathers. Public schools will focus on the 3 R’s, not indoctrinate children with critical race theory or any other political ideology.

We are going to eliminate racial politics in America. No government policy will be based on race. People “will not be judged by the color of their skin but by the content of their character.” We are all made in the image of God; to judge a person on the color of their epidermis is immoral.

3. Safety and Crime. The soft-on-crime days of coddling criminal behavior will end. We will re-fund and respect the police because, they, not the criminals, are the good guys.

We will enforce our laws, all of them, and increase penalties for theft and violent crime. We will clean up our cities and stop pretending that crime is OK. We have zero tolerance for “mostly peaceful protests” that attack police officers, loot businesses, and burn down our cities.

4. Immigration. We will secure our border, finish building the wall, and name it after President Donald Trump.

Nations have borders. We should give that a try. President Trump’s plan to build a wall was right. We welcome those who want to join us in building the American dream, immigrants who want to be Americans, not change America. We are a stronger nation because we are a nation of immigrants, but immigration without assimilation makes us weaker. Politicians from both parties talk big about border security and do nothing. We are done with that.

Socialism is un-American and always leads to poverty and oppression. We will stop it. We will shrink the federal government, reduce the government workforce by 25% in 5 years, sell government buildings and assets, and get rid of the old, slow, closed, top-down, government-run-everything system we have today.

6. Government Reform and Debt. We will eliminate all federal programs that can be done locally, and enact term limits for federal bureaucrats and Congress.

Many government agencies should be either moved out of Washington or shuttered entirely. Yesterday’s old government is fundamentally incompatible with the digital era. The permanent ruling class in Washington is bankrupting us with inflation and debt, so they must be removed. For you to have more, Washington must have less.

7. Fair Fraud Free Elections. We will protect the integrity of American Democracy and stop left-wing efforts to rig elections.

Today’s Democrat Party is trying to rig elections and pack the courts because they have given up on Democracy. They don’t believe they can win based on their ideas, so they want to game the system and legalize voter fraud to stay in power. In true Orwellian fashion, Democrats refer to their election rigging plans as “voting rights”. We won’t allow the radical left to destroy our democracy by institutionalizing dishonesty and fraud.

8. Family. We will protect, defend, and promote the American Family at all costs.

The nuclear family is crucial to civilization, it is God’s design for humanity, and it must be protected and celebrated. To say otherwise is to deny science. The fanatical left seeks to devalue and redefine the traditional family, as they undermine parents and attempt to replace them with government programs. We will not allow Socialism to place the needs of the state ahead of the family.

9. Gender, Life, Science Men are men, women are women, and unborn babies are babies. We believe in science:

Men and women are biologically different, “male and female He created them.” Modern technology has confirmed that abortion takes a human life. Facts are facts, the earth is round, the sun is hot, there are two genders, and abortion stops a beating heart. To say otherwise is to deny science.

10. Religious Liberty and Big Tech Americans will be free to welcome God into all aspects of our lives,

and we will stop all government efforts to deny our religious freedom and freedom of speech. The Democrat Party and their Big Tech allies are not merely secular; they have virtually created a new religion of wokeness that is increasingly hostile toward people of faith, particularly Christians and Jews. They are determined to drive all mention of God out of public view. We will not be silenced, canceled, or told what words to use by the politically correct crowd.

11. America First We are Americans, not globalists.

America will be dependent on NO other country. We will conduct no trade that takes away jobs or displaces American workers. Countries who oppose us at the UN will get zero financial help from us. We will be energy-independent and build supply chains that never rely on our adversaries. We will only help countries that are willing to defend themselves, like Israel.

A quote from the “A-Team”- I love it when a plan comes together.