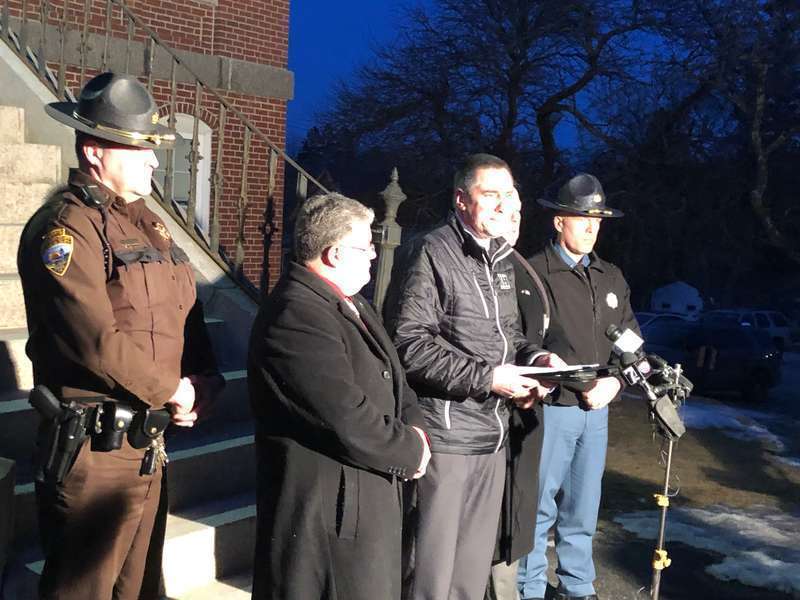 Maine State Police Lt. Troy Gardner, center, stands with Washington County Sheriff Barry Curtis and Chief Deputy Michael Crabtree at a press conference held on the evening of Monday, Feb. 3. Gardner relayed the timeline of a shooting rampage that left three people dead in Machias and Jonesboro, and injured a fourth. Suspect Thomas Bonfanti of Northfield is charged with murder and is currently being held in the Washington County Jail in Machias. Photo by Wendy Little

Three people were killed and a fourth injured in a shooting rampage that took place at three locations in Machias and Jonesboro on the morning of Monday, Feb. 3.

Maine State Police Lt. Troy Gardner spoke at a press conference in front of the Washington County Courthouse Monday evening and said that suspect Thomas Bonfanti, 63, of Northfield,  has been arrested and charged with murder after the shooting deaths of Shawn Currey, 57, Samuel Powers, 33, and Jennifer Bryant Flynn, 49. A fourth victim, a female, was injured and is hospitalized.

Lt. Gardner shared the timeline of the events. Authorities were alerted to the shootings when Washington County Regional Communications Center (RCC) received a 911 call at 10:47 a.m. from 323 Kennebec Road in Machias. Upon arrival there, law enforcement found an injured adult female outside, and a deceased male, Shawn Currey, inside. Medical personnel transported the female to the hospital.

At 11:03 a.m. RCC received another 911 call, this from 69 Roque Bluffs Road in Jonesboro, where authorities found Samuel Powers deceased.

At 11:15 a.m., Washington County Sheriff’s deputies responded to a call that the suspect was at the American Legion located on Court Street. There authorities arrested Bonfante and charged him with murder. He is currently being held in the Washington County Jail in Machias.

Lt. Gardner said officials believed there is no current threat to the public, that Bonfante was working alone, and that he knew the victims. Police have recovered a weapon they believe to be the murder weapon.

The Maine State Police were assisted by the Washington County Sheriff's Deputies, Machias Police, the Maine Warden Service and the Maine Forestry Service.

Not long after the first 911 call, authorities advised the Machias schools to go into lockdown. The schools complied and notified parents. The lockdown was lifted within the hour.

As the Crow Town flies