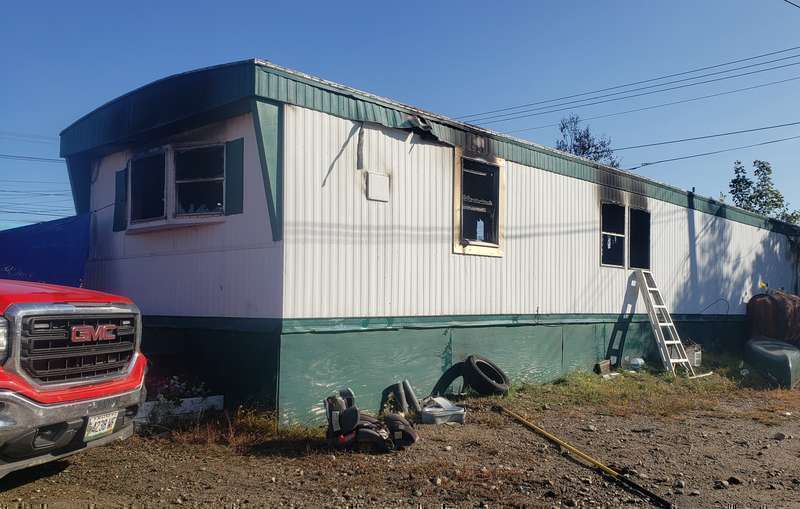 According to Sergeant Mary MacMaster of the state fire marshal’s office, the cause of the fire is not yet known and the identities of the two deceased individuals, who lived together in one of the two homes, have not yet been confirmed. The fire started sometime before 3 a.m. on Monday, Sept. 21.

“They’re just starting to go in now,” said MacMaster. Three state investigators will be on the scene today.

East Machias, Jonesboro, Machias, Marshfield and Machiasport Fire Departments rendered mutual aid at the fire, which was called into the Washington County Regional Communications Center at 2:51 a.m. The trailer park is located on Route 1 in Machias, near the East Machias town line.

Sara Alley was asleep when she heard the man banging on her door. His name is not yet available.

“And I heard a banging on the side of the trailer. My boyfriend ran out, and it was a guy from RH Foster, and he had kicked the door in,” said Alley, who lived next door to the home where two people died. “My boyfriend came running back down the hall and said fire. I went in and grabbed my one-year-old and ran out the door.”

Temperatures were in the 30s last night, and Alley’s son was wearing only a diaper, and she was wearing shorts and a t-shirt. Her neighbors provided them with clothing because her home was also destroyed by the fire.

This story will be updated as more details become available.

What the summer leaves behind