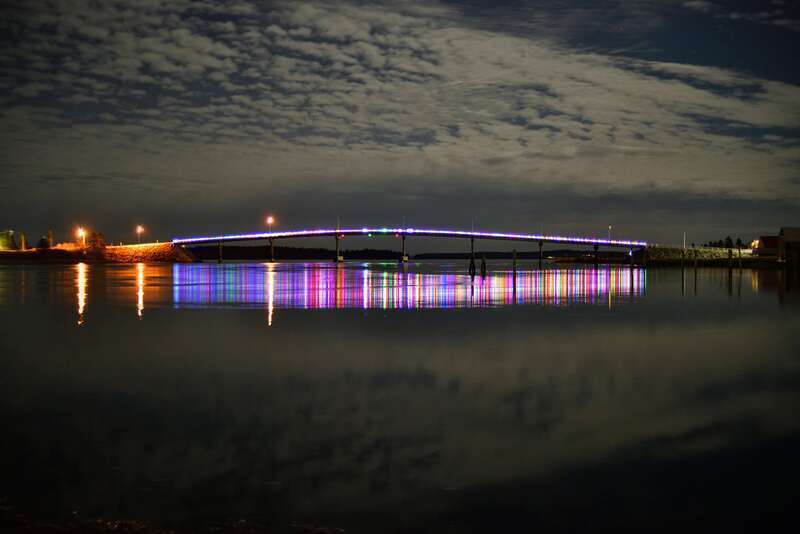 For the first time, this week the Franklin Delano Roosevelt International Bridge shines with Christmas lights. Joel Ross said he wanted to brighten spirits after long months of separation between the deeply connected American and Canadian communities. Photo by Loring Munson

Lights tie Lubec and Campobello together for Christmas

It all began with a question.

“I was wondering if it might be possible to decorate the bridge for Christmas?” asked Joel Ross of Lubec, posting Nov. 29 on Facebook. Readers enthusiastically applauded his idea, and this week for the first time ever, the Franklin Delano Roosevelt International Bridge —  and the saltwater beneath it —  shine with Christmas lights.

The bridge connects Lubec, the easternmost town in the nation, with Campobello Island, New Brunswick, Canada.

“I was surprised no one had thought of it before,” said Ross, whose wife Lacee is from Campobello. She has been unable to visit since the beginning of the pandemic so once or twice a week Joel, Lacee, and their four sons drive to the Lubec boat ramp just to look at the island.

“She misses it terribly,” said Ross.

“There have been a lot of people separated, you can’t throw a rock around here without hitting a family that has some people on one side or the other,” said Ross. “It’s hard on a lot of people to not be able to be together, so I thought if we can’t be together physically, maybe we can be together emotionally a little bit.”

With an overwhelming amount of community support, Ross raced to put his idea into motion, first gaining permission from the U.S. Coast Guard, the Maine Department of Transportation, and U.S. Customs.

This week he completed stringing colored lights on the southern side of the bridge, which is visible from downtown Lubec. Now, he’s working to string white lights on the other side, which will be visible from West Quoddy Head Lighthouse.

“They were both amazing women who have done whatever they could to help the community,” said Ross. “They’ve passed recently, Sandra is Lacee’s grandmother, I loved her dearly.”

The lights are powered by a generator, which has consumed more gasoline than Ross originally expected. So far, an online fundraiser and local donation buckets, placed at Lubec IGA and McFadden’s, have covered the cost of the lights. Then, a large donation from McFadden's covered the cost of gasoline.

Making the most of last Thursday's good weather, Ross was hard at work stringing the other side of the bridge.