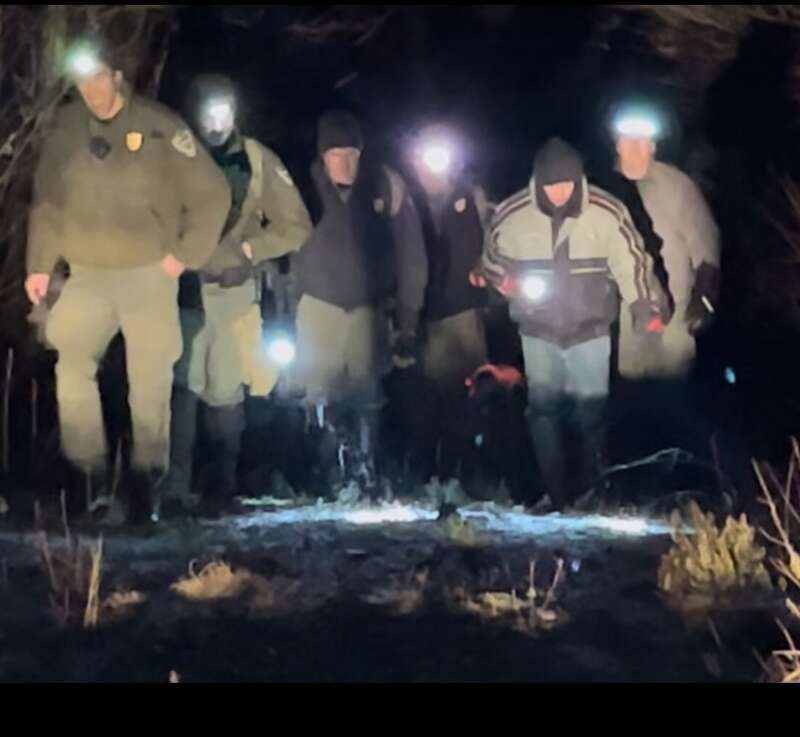 A four-hour nighttime search conducted during an ice storm resulted in the safe rescue of Peter Taylor, of Cutler. Five Maine Game Wardens, two Maine Forest Rangers, the Whiting Fire Department, K-9 Grizz, and Washington County Sheriff’s Deputy Toni Bridges participated in the search. “He had fallen through the bog at one point, and gotten cold and wet and tired,” said Warden Josh Beal. “At some point, he decided to lay down and go to sleep.” Photo courtesy Maine Warden Service

Ice storm search and rescue has happy ending in Cutler

Peter Taylor set out by ATV on Sunday morning, looking for moose antlers, a frequent pursuit of his. His family knew Taylor would normally return from the woods by midday, so when he didn’t come home, they went out to search for him.

“Our son Alan found his four-wheeler,” said Patricia Taylor, “which was wonderful, and people started showing up.”

Increasing winds and cold sleet complicated the search and made Patricia worry about falling trees and limbs. The family called the Maine Warden Service at dusk and reported him missing, according to Warden Josh Beal. Two Maine Forest Rangers, Jeff Currier and Aaron Currier, plus five wardens, including Warden Alan Curtis and K-9 Grizz, responded to the scene, along with Deputy Toni Bridges.

The search lasted almost four hours, during which the wardens used headlamps, flashlights, and a siren to announce their presence.

“It was sleeting the whole time,” said Beal. “Eventually they heard somebody yelling on the edge of a bog, and they could make voice contact with him."

Walking through the Cutler woods, Taylor had fallen into a bog at one point.

“The woods are quite thick. He was weak, hadn't eaten since the morning, and had nothing to drink,” said Patricia. “He was prepared to spend the night, had his bed made under a big tree, and had a lot of clothes on. But then he heard a little bit of the siren and saw the lights. It took him a while to get up on his legs and walk to the light, and then the dog found him.”

“He was wet and cold,” said Beal. “The wardens started a fire to warm him up and another team came into their location from another road to help assist in getting him out. But with the fire, they were able to warm him up enough that he walked out completely on his own.”

“We figure that dog saved his life,” said Patricia, who praised all the first responders involved in the search and rescue. An ambulance at the scene examined Peter, who was then taken home by his son.

“He’s very thankful and very fortunate for the help that he got, I was thankful they found him,” said Patricia. “It was an ordeal and a half.”

An earlier version of this story omitted the work of two Maine Forest Rangers who also participated in the successful search and rescue. That mistake is now corrected, with our apologies. SCD / Editor