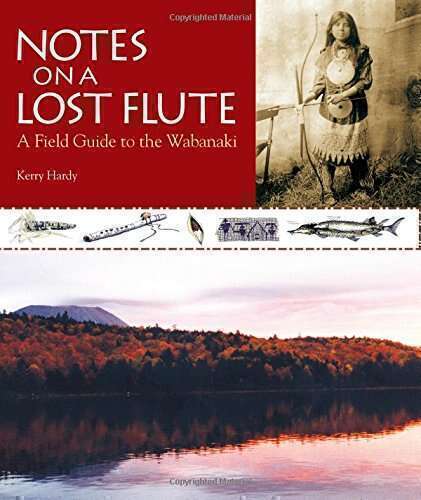 Maine author Kerry Hardy will speak this week, at 7 p.m. on Friday, July 29, at the UMaine Machias Performing Arts Center. Admission is free.

‘Notes on a Lost Flute’ offers history lessons for modern life: author Kerry Hardy to speak in Machias this week

Kerry Hardy traces the beginnings of his interest in Native American lifeways back to the fields and woods surrounding his childhood home in Lincolnville, where he and his sister spent thousands of hours playing.

“If you’re a kid growing up in rural Maine, the idea of living in the woods, hunting, and fishing, or making a birchbark canoe is the stuff of dreams,” writes Hardy. “My childhood was filled with dismal attempts at snaring rabbits or making “pemmican” — the Indian journey food — with bitter acorns and insipid berries.”

Since then, Hardy has learned to make pemmican correctly, and next week he’ll share more of what he’s learned when he discusses his book, Notes on a Lost Flute: A Field Guide to the Wabanaki, as part of Porter Memorial Library’s Authors at the Last Page series.

The public is invited to hear Hardy at 7 p.m. on Friday, July 29, at the University of Maine at Machias Performing Arts Center. Admission is free.

Anyone with an interest in history will enjoy learning more about Wabanaki history, which extends back for millennia and isn’t thoroughly taught in America.

“One of the many glaring weaknesses of our history education in this country is the way it’s taught as if it’s a two-week period between landing at Plymouth Rock and the Revolutionary War, rather than a century and a half,” says Hardy.

Notes on a Lost Flute is printed in a large paperback format, and alongside the text, every page is adorned with historic quotes, photographs, or illustrations that supplement the storyline. Hardy says he chose that format on purpose, in part to avoid the use of footnotes.

“I really think young people have an almost universal interest in Native American history and lifeways,” says Hardy. “The book was written in hopes that anyone from junior high upward could find it accessible.”

An ecologist by training, Hardy followed his own fascination through three years of research to create the book, which was published by Down East Books in 2009. Before it went to print, advanced readers reviewed the material, including former Penobscot Nation Chief Barry Dana, and famed Passamaquoddy artist David Moses. Both heartily approved.

“It was the nature of the book, that it was working on language mysteries so old, they had forgotten them themselves because of cultural loss,” recalls Hardy. “It was giving back pieces of a jigsaw puzzle that had been lost years ago, and they welcomed those.”

“Any serious study of the history of North America cannot help but make us aware of the social and environmental injustices that ‘civilization’ has inflicted on this continent,” writes Hardy, in the book’s opening chapter. “Perhaps in these essays, some will find reasons to believe, as I do, that Indian landways and lifeways still offer viable models for an American future that’s yet to be determined. “

“This book is a great example of the creative way that [Hardy] tries to engage his readers, which is not to give a dense, expert text on Native American life in Midcoast Maine but to actually get us interested to explore and be curious and ask questions in the way he does, as an author,” says Grimshaw, noting the book is called a field guide on purpose.

“Instead of lecturing us, he asks us to take these journeys with him and explore, to keep our eyes open,” says Grimshaw. “He’s getting us interested in finding out more about something that is the history of America, something we don’t know that much about.”

The book’s five chapters take readers through the old roads of Maine, made long before Europeans arrived, the “time-places” of ancient Maine, food from the sea and shore, a culture built around nature, and a sampling of flora and fauna, capped off with an index of Algonquian terms.

Dwayne Tomah serves as Director and Curator of the Sipayik Museum and is often informally referred to as the Passamaquoddy “Language Keeper” in part because today, he’s the youngest living fluent Passamaquoddy speaker. When asked about the importance of studying history, he shares a quote first in Passamaquoddy.

“I said it in my language because everything is in the language,” says Tomah. “It means, ‘If you know where you come from, you’ll know where you’re going.’ That’s a famous quote from one of our tribal members, Dr. Wayne Newell.”

Kerry Hardy’s author talk will take place at 7 p.m. on July 29, at the University of Maine at Machias Performing Arts Center. Admission is free. Anyone wishing to join Dr. Anna Grimshaw’s Wednesday book discussion group at Porter Memorial Library can call the library for more details, at 255-3933.

Note: Sarah Craighead Dedmon is president of the Porter Memorial Library Board of Trustees.

Youth step up to the plate for local food and farming