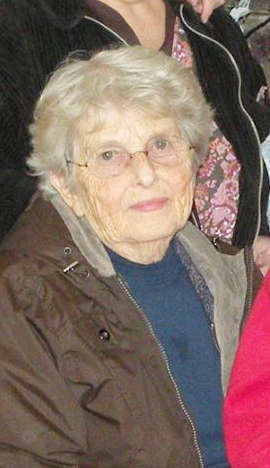 Sandra Nina Hill, 82, passed away peacefully at home on Tuesday, September 26, 2017. Sandra was born in Calais on April 15, 1935, daughter of Lawrence and Gwendolyn (Gardiner) Johnstone.

Sandra started working as a C.N.A. at the age of 13 and graduated from Calais Academy, Class of 1954. In 1955, she married Robert Hill and later worked as a telephone operator for many years. Wanting to go back into the medical field, Sandra earned her L.P.N. degree at the age of 45. Sandra was proud to have attended Washington County Community College at the age of 81, taking a course in creative writing. She was a member of Calais United Methodist Church, United Methodist Women, International Quilter’s Guild, Calais Hospital Auxiliary, Orion Chapter #45 O.E.S., and PAWS Humane Society. Sandra loved her dogs, quilting, camping, and above all else, spending time with her family. She will be sadly missed by all for her charm and sassy wit.

The family would like to thank Dr. Peter Wilkinson and all the medical teams at Calais Regional Hospital, Marshall Manor, Down East Community Hospital, VA Rehab Center of Bangor, Community Health & Counseling Hospice, and a special thanks to Dr. Dixon and the staff at St. Joseph’s Hospital.

A graveside service was held on Sept. 30, 2017 at Red Beach Cemetery in Calais. Arrangements by Mays Funeral Home, Calais & Eastport. Condolences and memories may be shared at www.maysfuneralhome.com

Machias couple emerges from self-quarantine after return from Italy
4,752 Views