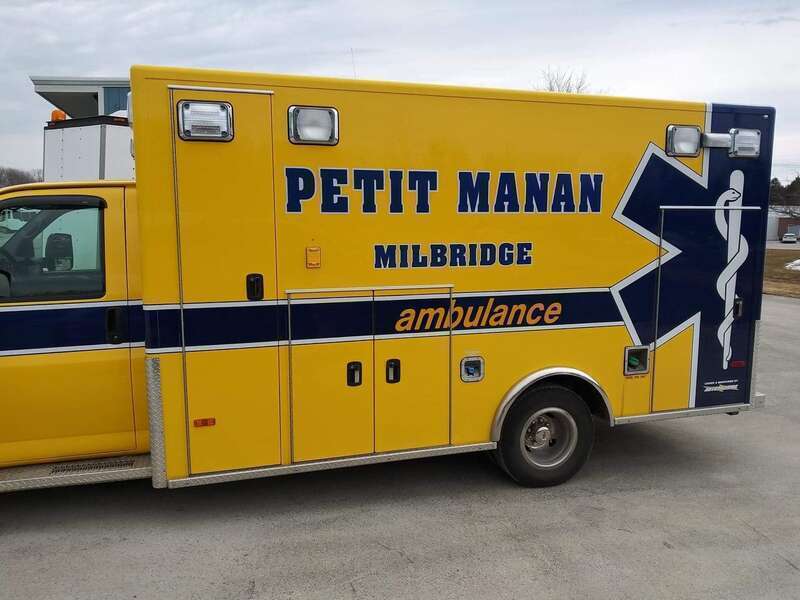 Protracted financial losses have led the Petit Manan ambulance service to consider closure. In 2022, the service made 544 calls across Milbridge, Harrington, Cherryfield and Steuben, as well as dozens of emergency transports, mostly to Bangor. Photo courtesy Petit Manan

The nonprofit Petit Manan Ambulance Corps is weighing whether or not to close its doors following another year of lost revenue and news that the municipalities it serves, Milbridge and Steuben, have declined to offer additional financial support.

Milbridge contributes $2,500 annually to the service, and also pays for one office and an ambulance bay for Petit Manan’s use, in the Milbridge fire station. Town Manager Lewis Pinkham said the Milbridge Board of Selectmen voted unanimously against a request to provide Petit Manan with $25 in annual funding per capita, a figure that would equal roughly $30,000 for Milbridge.

“This has been an ongoing issue for Petit Manan for a number of years, always asking for more money,” said Pinkham. “It’s a shame. It’s unfortunate that it has come to this.”

Steuben was also asked to make a $25 per capita contribution to the service, which the town declined. Town clerk Julie Ginn said Steuben wants to consider all of its options for ambulance services.

“Steuben’s position is not that they don’t support Petit Manan, it’s about trying to find the best way to look after all residents,” said Ginn. “Is that seeking an alternate service, or is it regionalization of services? That has been a topic of discussion for a very long time. As the cost of services increases and the demand for services increases, it’s time to start thinking about what’s best for everybody involved.”

In 2022, Petit Manan made 544 runs, using its one ambulance, according to data from Petit Manan Service Representative Nancy Parritt. Of those, 319 were emergency runs, 143 were routine transfers, 37 were emergency transports, 43 calls ended in no transport, and two calls put the service on standby, for something like a fire.

Between the two towns, calls to Milbridge made up the vast majority of Petit Manan’s runs, at 180 compared to Steuben’s 60. In addition to Milbridge’s general emergency calls, Petit Manan also made 83 calls for residents of Narraguagus Bay Healthcare, located in Milbridge.

“What people don’t realize is we’re a dedicated group of people, no matter the town, so if Milbridge needs an ambulance and Machias is the only one available, we’re going to go,” said Taylor. “Washington County has a very dedicated group of EMS providers, we’re keeping towns covered, but the day will come when that can’t happen.”

“Everyone is under the impression that they’re going to call 911 and someone is going to show up and that is absolutely not true, and people need to know that,” said Petrie, who next week will host a meeting about Downeast EMS in Columbia Falls.

Town officials from Steuben to Machias have been invited to join in the Jan. 12 discussion with local EMS personnel, with the goal of ensuring the survival of EMS in Washington County, possibly through collaboration. Petrie recently heard of one rural Maine 911 call in which the local ambulance couldn’t respond, nor could the backup ambulance service. By the time the third one arrived, it was too late.

“People need to know just how tenuous their EMS system is,” said Petrie, who has worked in EMS for 45 years, and with Atlantic Partners EMS for more than 20.

Next week’s meeting will be held from noon to 2 p.m. on Thursday, Jan. 12, in the Wreaths Across America gymnasium, 4 Point Street, Columbia Falls.

Parritt said she is considering whether to close the Petit Manan service but is still seeking alternate solutions.

“I can’t rob Peter to pay Paul anymore,” she said.

Research provided to the Blue Ribbon Commission to Study EMS in Maine reveals that all ambulance runs are likely to result in lost money, says Petrie, in part because the EMS funding model is based on a “pay for transport” model.

“Which means if you show up and transport the patient you can bill for it,” said Petrie. “The problem with that is it doesn’t take into account any other activities that go into a successful EMS service, like regulatory oversight, administration, and training.”

Another contributing factor to poor ambulance revenues is the fact that more than 70 percent of all ambulance runs in Maine are paid for by Medicare or Mainecare. Those services will only reimburse 85 percent of the cost.

“Right off the bat you lose money,” said Petrie. “So every single ambulance service in the state of Maine has to be subsidized, whether through tax subsidies or if they’re owned by a hospital, through the hospital’s finances.”

In order to keep the service running, Petit Manan’s seven EMS workers do not take the customary “on call” pay, only pay for the hours they’re actively working in the ambulance.

“We’ve been right out straight more than ever, sometimes with two to four runs a day,” said Parritt. “We’re all struggling, almost all of us have to have other jobs, too.”

Petit Manan renders mutual aid to Cherryfield and to Pleasant River and vice versa. Cherryfield, a municipal ambulance service, is also weighing how to move forward. Service Chief Mariah Curtis says her challenge isn’t money, it’s staffing. Most days of the week, Cherryfield is offline, only able to make calls during evening and weekend hours.

“This isn’t about getting back to a time when [ambulances were] a profitable service, this never used to be a profitable service,” said Curtis, who reached out to Petrie to organize next week’s meeting. “At the end of the day, fixing it is going to cost money, there’s no way around that.”

Ginn plans to attend next week’s meeting on behalf of Steuben, and hopes it kicks off a productive conversation.

“If towns were to come together and figure out a solution on how to get people in a building and available for service, it might cost more, but we need to look at that alternative,” said Ginn.

One possible outcome could be a form of regionalization, a word that sometimes provokes strong reactions, says Petrie.

“Regionalization could look a couple of different ways. Some people are wary because they think of it as closing down some services and have other services cover them, but that would be very difficult in [Washington County],” said Petrie. “Instead, it could bring all of the services under one administrative structure, but still keep the ambulance bases where they are.”

Maine considers EMS to be an essential service, but towns are not legally required to provide it.

“The hard conversation is that EMS costs money and the communities need to decide what they want to have, and what they’re willing to pay for it,” said Petrie. “We’ll just have to hold our breath and hope that we can keep [Petit Manan] with their heads above water until we solve this.”

The Nature of Phenology: Frozen puddles