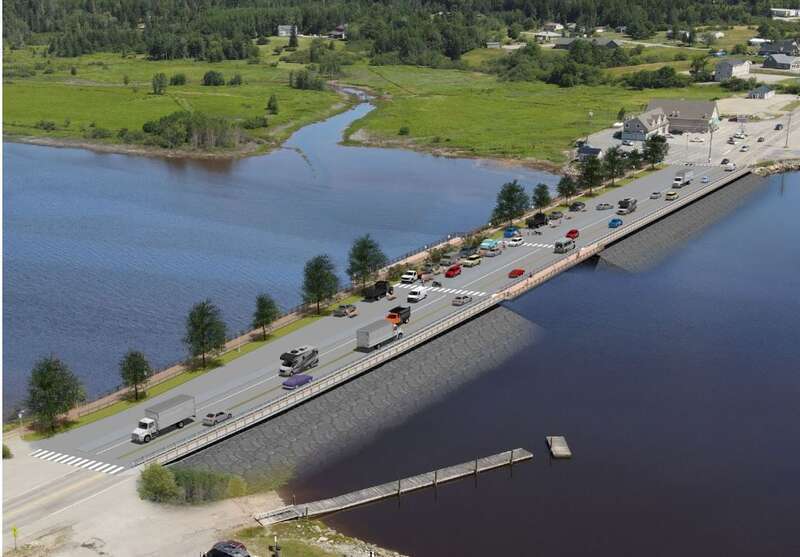 The Maine DOT today announced it will pursue a bridge as the "preferred alternative" for replacement of the aging Machias Dike. DOT also plans to retain the current surfance design, leaving room for vendors and other uses. This image was last year created by local stakeholders to show what a bridge could look like. DOT plans a June 28 public meeting on the decision. Submitted photo

This afternoon, the Maine Department of Transportation (MaineDOT) announced a bridge span as the preferred alternative to replace the existing four box culverts on the Machias Dike Bridge, which carries Route 1 over the Middle River in the Machias.

The current structure dates to the Civil War era and is deteriorating.

A public meeting is scheduled for 5 to 7 p.m. on June 28 at Machias Memorial High School to discuss the process that led to this decision and DOT’s next steps.

In their announcement, DOT said information collected to date led them to determine that a bridge will best meet the project’s purpose and need to improve the structure’s condition, maintain the Sunrise Trail, and provide for future rail use.

“A bridge will return tidal exchange upstream of the causeway, improving fish passage, and accounting for anticipated sea-level rise,” read the release. “ MaineDOT will keep working with the town and public to ensure the bridge and causeway area continue to support existing uses such as vending, parking, walking, cycling, and ATV use.”

Today’s announcement will likely be met with a wide range of strong reactions, including anger from Middle River landowners whose properties face inundation due to tidal restoration.

Retaining the current surface uses of the dike, such as vendor parking, will likely be seen as an economic win for central Washington County, where food trucks and other vendors can easily, and with no fee, sell to Route 1 customers, especially during the tourist season.

From an environmental perspective, local land trusts have also weighed in favor of the bridge for salt marsh restoration and fish access, especially for the Atlantic salmon. Frequent flood events in recent years have overtopped the dike, raising concerns of downtown flooding as sea-level rise continues. A taller surface with greater water flow would be designed to eliminate or greatly reduce that flooding.

The DOT opened dike replacement discussions in 2009, when cracks, rotten timbers, and roadway settlements were discovered. In 2018 DOT announced its earlier  “preferred alternative” — a straight rebuild of the existing dike structure, with no changes. However, federal feedback cited concerns about a lack of fish passage through the dike’s four box culverts, leading DOT to send the dike project back to the drawing board last year.

DOT previously held public meetings on this study in March and September 2021, and has participated in regular coordination meetings with town staff and other regional stakeholders. Additional project information is available at https://www.maine.gov/mdot/projects/machiasbridge/.