Less than one week after halting worldwide shipping by blocking the Suez Canal, the Ever Given container ship has run aground in Machias. "Not again!" said the captain. Photo courtesy Ryan Malagara, Drones Eye View Inc.

‘Not again!’ cries Ever Given captain, now lodged in Machias River

The Machias Police Department is directing Route 1 traffic today, Thursday, April 1, due to the spectacle of a large container vessel lodged in the Machias River below Bad Little Falls. No one knows exactly when or how the Ever Given arrived in Washington County, apparently traveling downriver from the north.

“I thought I heard something go by last night,” said Michael Hoyt, speaking from his riverside camp in Centerville. “Usually the container ships make more noise.”

Former Machias Selectman Bill Kitchen recalls hearing a “large screeching noise” around midnight, and now believes it was the Ever Given passing below the Jeremiah O’Brien Memorial Bridge before descending Bad Little Falls.

Town and county officials are currently meeting with the ship’s captain and members of the local fishing fleet to determine how best to move the 220,000-tonne vessel off of a small shoal below the Maine Wild Blueberry factory. While the ship waits, local restaurants have leaped into action to provide special meals for the 25-person crew, including Cargo Calzones from Pat’s Pizza, High and Dry Blueberry Pie from Helen’s, Hing Garden's Crab Marooned, Run Aground Beef Burgers from The Thirsty Moose, Freighter Taters from Tom's Mini Mart, and The Bluebird’s famous homemade donuts, decorated like Ever Given life preservers.

“Their donuts are so big and light and fluffy, we’re hoping they can help float the ship,” said Machias Town Manager Christina Therrien. 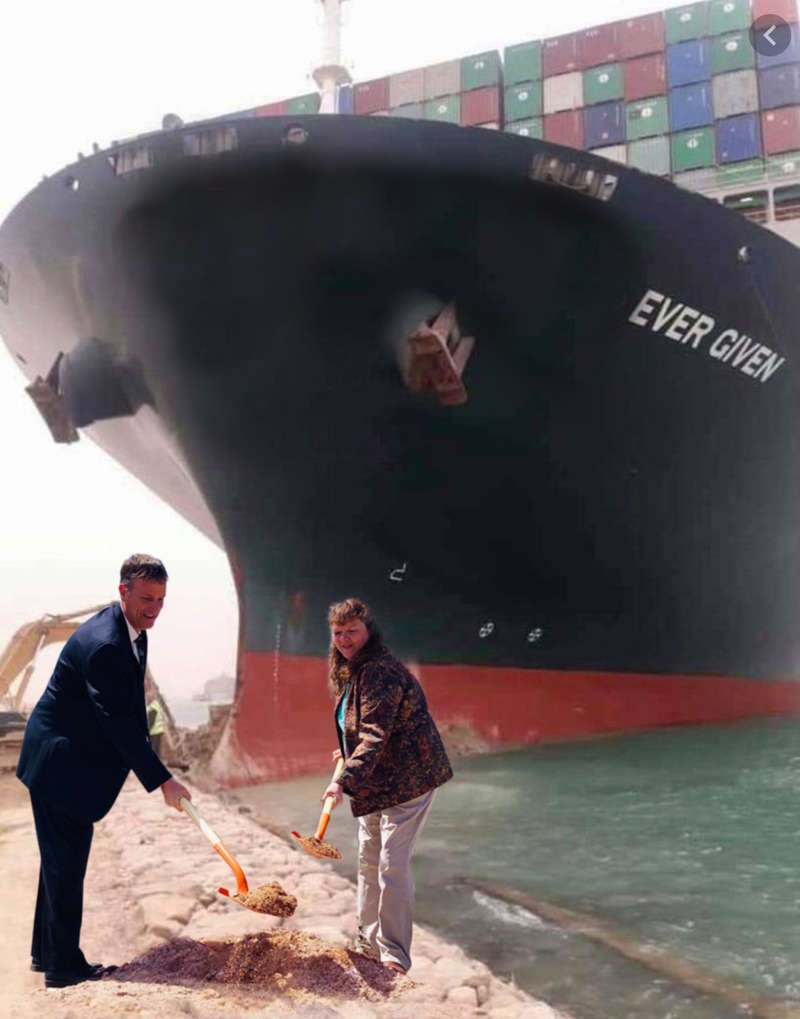 Machias Savings Bank President Larry Barker and Machias Town Manager Christina Therrien lend a helping hand to move the Ever Given on its way out of The Machias River. Photo by Dewey Foolem

If the Ever Given cannot be moved, some stakeholders say it should be converted to a tourist attraction for the benefit of all of Washington County.

“This isn’t the first time Machias has captured a large foreign ship,” said local historian Valdine Atwood, offering her idea for repurposing the vessel. “We could rename it the H.M.S. Margaretta II and turn it into a history museum.”

Solar proves its worth for Sunrise Opportunities
Quick search
Categories